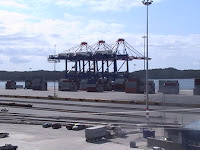 The much anticipated second ship pulled alongside the Fairview Container Terminal dock on last week, making for double the amount of arrivals per week at the port and starting speculation as to when more vessels may call on the Port of Prince Rupert.
The addition of a second vessel however won't translate into a sudden surge in employment on the waterfront, as Maher Terminals already has more than enough workers on call to handle the extra volume and in fact it will mainly result in more hours for those that handle the first vessel of the week on Wednesday's.
Something that will be a bit of a disappointment to the many applicants who secured a much coveted union number last summer and still wait for a call to a regular and profitable workday on the docks.
So far the employment picture at Fairview has been rewarding for those with the high numbers and for those that reclaimed their local status, or returned from the Lower Mainland, but not quite the finding of gold many suspected during last summers cattle call of applications.
With vessel number two now secured on a regular route, the attention turns to luring a third vessel to head for the North coast, which would be the third and final spot on the Rupert roster until expansion of the Fairview dock takes place.
The Daily News provided some background on the new arrival and how it impacts on the day to day operations of the Terminal.
All eyes on port as additional ship calls at Rupert
BY CARLA WINTERSGILL
The Daily News
Monday, July 14, 2008
Page one
The newly added second weekly COSCO ship arrived last week at the Port of Prince Rupert, and its success could attract another line to Rupert.
"The way it works is that we have room for three calls a week," said Barry Bartlett of the Port Authority.
"Basically, there is room for one more. Our understanding is that there is a high level of interest and activity among other shipping lines to fill that third slot."
Everything went smoothly with the new steamship.
"The ship arrived on time, was unloaded within the time frame and departed on time," said Bartlett.
COSCO, along with its business alliance, was the first company to call at the newly opened port in 2007.
The company ships cargo in from China to North America via Prince Rupert.
Compared to other West Coast ports, Prince Rupert is the closest port to Asia by 58 hours of sailing time. This allows shippers additional time in which to squeeze in approximately one extra round-trip voyage per year.
But increased activity in the port doesn't necessarily translate into extra jobs.
Mark Schepp of Maher Terminals says that the port already has enough staff to handle the extra cargo.
"It just means more days and additional shifts for the current workforce. It doesn't mean that we're going to hire more people," said Schepp.
"It just means that the current workforce will be employed on more days of the week. We have a large enough workforce, so that they will work more."
Posted by . at 12:37 am