From the New Skeena to the New Ridley, Mr. Veniez is in the news again! 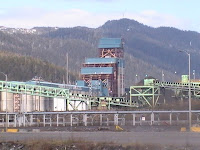 “I failed to get the job done here.” Success at Ridley, then, would make up for the Skeena debacle.” ; “In some corners of Prince Rupert, they call Ridley Terminals Fantasy Island,” ; he got a rambling oral briefing and “a general attitude of defeat” from Ridley executives. --A few selections from an in-depth Globe and Mail article featuring Ridley Terminals Chairman Dan Veniez

The article appearing in this Saturday's globe and Mail could just as easily been subtitled "Dan Veniez in charge", "Dan Veniez: Portrait of a Capitlalist!", or perhaps "Turning Darth Vader", providing as it does an interesting look at Mr. Veniez's stewardship of Ridley Terminals, seven months after his surprising announcement as the new Chairman of the coal and commodities terminal.
Appearing under the Title: “Crushing the ‘general attitude of defeat", the article paints a pretty dynamic picture of the Chairman and the challenges that he faces, this as he begins his process of turning around one of Prince Rupert’s largest employers. The website edition, in addition to providing the complete article also includes a photo gallery of shots from Ridley Island.
Never shy from media appearances and always known for a good and often colourful quote, Mr. Veniez doesn't disappoint as he provides more than a few interesting observations on his past in the community and of the past, present and future of his newest venture on the North Coast.

In the wide ranging article in the Saturday edition of the Globe and Mail’s Report on Business, Mr. Veniez reflects on his reputation in the region, the state of Ridley Terminals and his mandate to “provide inject private-sector discipline into a corpulent Crown corporation.”
.
The article also helps to fill in some of the blanks from the recent firings at Ridley, which saw three senior managers dismissed sending a few shock waves around the city.
The Globe article includes a few observations from the union side which will prove to be interesting around the local coffee shops and restaurants, providing as it does a much different image of Veniez than the last one we had during the final death rattle of the New Skeena days.