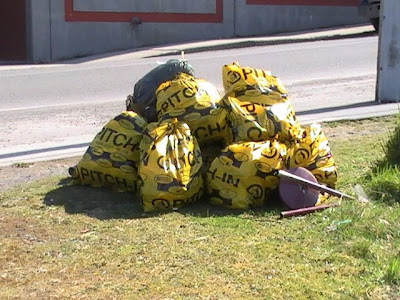 The Communities in Bloom judges will be here this week, eager to see what kind of visual images have been provided amidst the many rain showers of a soggy summer so far.
The judges who will be examining the city on the accomplishments of their whole team, from the municipal efforts, through to private, corporate and institutional.
In order to get a proper head start for this weeks inspection, Civic Pride launched a community clean up on Sunday to try and take care of any of the last minute clutter which might detract from the city's appearances.
The Daily News featured some background on their plans and the Communities in Bloom project as the front page story in Friday's paper.
WHOLE CITY URGED TO SHOW PRIDE, HELP RUPERT BLOOM
With judges arriving next week Civic Pride is calling for support
By Kris Schumacher
The Daily News
Friday, July 18, 2008
Pages one and three
Prince Rupert Civic Pride volunteers are ready to get their hands dirty this weekend, and are hoping that they can get more residents than ever to help out with their annual clean-up effort.
With the Communities in Bloom judges set to arrive in town on Wednesday, this weekend marks the last chance for the public to put a positive face on Prince Rupert. The city has already come a long way with its sprucing-up, thanks to the efforts of the Prince Rupert In Bloom Committee and other volunteers, but as any good gardener or housekeeper knows, there's always more to be done.
"As usual, we'll be meeting at Mariner's Park at 1 p.m. on Sunday, and I'll be handing out bags and gloves," said Civic Pride organizer Charlotte Rowse.
"We hope that we can get a big crowd to come out and help make the city look great, like we did with the Second Avenue planters."
The last time Civic Pride organized a clean-up was in April, and Rowse says there's a noticeable difference in the appearance of the downtown core each time they get generous volunteers out to beautify the city. She hopes this Sunday will be a productive day for picking up litter in target areas of town, and along with the Prince Rupert In Bloom Committee she has specific places in mind for groups of volunteers to go after they arrive at Mariner's Park.
Treena Decker with Community Futures of the Pacific Northwest has been working hard for months to organize the local Communities In Bloom Initiative. She said Prince Rupert stands a good chance of doing well in the competition against other British Columbia communities with a population of 10,000 to 20,000.
"We are asking all local residents, businesses and organizations to do their part to put a positive face on Prince Rupert," said Decker.
"If every person in town cleaned up their yard or business front, we will have amazing results. On July 22, 2008, we will be hosting a community reception for the two Communities in Bloom Judges and on July 23, the judges will be evaluating Prince Rupert on the accomplishments of their whole team: municipal, private, corporate and institutional."
Through a local organizing committee consisting of representatives from a variety of community organizations and service providers, the goal has been finding collaborative and fun ways to engage citizens in making Prince Rupert look as beautiful as possible.
When the judges evaluate on Wednesday, the city will be judged on eight specific criteria. These include tidiness effort including litter, weeds, maintenance and graffiti in green spaces, on streets and medians, sidewalks, ditches, road shoulders and vacant lots; environmental awareness including policies and by-laws, waste reduction, landfill sites, sewage disposal, recycling programs. Integrated Pest Management (IPM), and water conservation.
Another area on which Prince Rupert will be judged is community involvement with projects such as clean-up days, recreational programs, and projects for the common good.
The judges will also look at heritage efforts to preserve built heritage and to promote natural and cultural heritage and analyze urban forestry including the existence of by-laws and standards for planting suitable trees, good care practices, inventory and succession planting.
That will involve learning about efforts by the community to make plants an essential element of the surroundings; floral displays including general beautification with beds, baskets, grasses and other ornamental displays and turf and ground cover areas both public and private.
Consideration will be given to the quality of naturalization, turf management, IPM and fertilization programs.
Communities in Bloom has the endorsement of a cross-section of Prince Rupert including; Civic Pride, the Prince Rupert Garden Club, the World Wildlife Fund, The Prince Rupert Heritage Committee, the Kaien Island Youth Council, Prince Rupert & District Chamber of Commerce, the Green Task Force, Community Futures Pacific Northwest, Oldfield Hatchery, Restorative Justice, the city, the school district and many individuals.
Posted by . at 12:56 am