And judgment day has arrived! 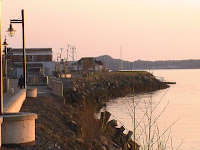 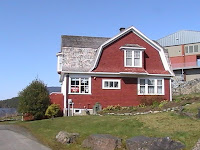 "We don't win by an award, but what we do. If we look at home much this community gives and volunteers, we walk away winners." -- Mayor Herb Pond providing the background scene setting to the welcoming night festivities for the Communities in Bloom judges.
With sunny skies and a warm breeze the Communities in Bloom judges have begun their investigation of Prince Rupert's community spirit and how it shapes up against other communities involved in the program that spans the nation.
Judges Peter Cranshaw and George Mitchell seemed quite taken with Mayor Herb Pond's opening remarks, which provided a generous bit of praise for the work of the local group that contributed to the work required to spruce the city up.
The two judges arrived in town on Tuesday and judging was to commence today, as the two representatives of the program made the rounds of the city examining and taking in many of our natural scenes.
The Daily News reviewd their arrival and what the program is all about.
Judges get first look at Rupert
Communities in Bloom officials impressed by city's community spirit
BY CARLA WINTERSGILL
The Daily News
Wednesday, July 23, 2008
Pages one and three
Although the judging was not due to start until today, Prince Rupert immediately impressed the two Communities in Bloom judges after their arrival in town yesterday.
"One thing we've noticed in the past five hours is that you people are incredible," said judge Peter Crawshaw.
"The community spirit is impressive, it's obvious the people help each other."
Judges Peter Crawshaw from Nanoose Bay and George Mitchell from Qualicum Beach were treated to a welcome ceremony at the museum of Northern British Columbia, which featured traditional drummers as well as speeches from Mayor Herb Pond, Communities in Bloom organizers Treena Decker and Shaun Thomas and members of the various organizations in Prince Rupert that contributed to the beautification of the city.
"It's my view that we're winners already," said Pond.
"We don't win by an award, but what we do. If we look at home much this community gives and volunteers, we walk away winners."
Judge Crawshaw echoed Pond's sentiment.
"When people hear Communities in Bloom, they all think about flowers. But it's not all about flowers. It's about community," said Crawshaw.
"The most important part is community involvement because without it, the community would just not exist ... community pride is the main winner. Communities in Bloom is just a way to show off all the good work that's already being done in town."
Crawshaw and Mitchell will be judging two other communities before heading back down south. This is Crawshaw's third year as a judge, while it is Mitchell's first.
Both men volunteer their time to do the judging.
Mitchell is retired, while Crawshaw takes time off working for the City of Parksville to do judging.
"It's my way of giving back," said Crawshaw.
Parksville has been involved with Communities in Bloom for the past five years and now competes on an international level.
Crawshaw said it is his city's chance to show off what it does best. He said every community is unique and pointed to the fact that Prince Rupert has incredible natural scenery.
"While Mayor Pond was talking, I was trying to pay attention but I was distracted by this beautiful eagle that was flying in the sun's rays," he said.
"You live in an incredible place."
Decker thanked all the volunteers who supported the Communities in Bloom effort during her speech.
"I'm really proud to be in a room with all these people because I think we have such an amazing community," she said. "It doesn't really matter what score we get."
Posted by . at 12:28 am