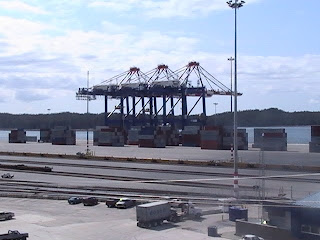 "As a result, we are maintaining a high velocity in moving customers' cargo from point of origin to destination consistently on time, efficiently and quickly."- -- Shaun Stevenson, vice president Marketing & Business Development for the Prince Rupert Port Authority outlining the ports success so far in the container moving business.

The addition of a second vessel to call on the Port of Prince Rupert is only going to improve the throughput, that at least seems to be the indication from Port Officials who have released quarterly figures which show that the word is getting out about shipping through Fairview.

While Port representatives continue to seek out a third vessel stop, they are using the current numbers to express their belief that the future is very positive for the NOrth coast and it's place in the world of shipping.

The Daily News featured details of the ports figures as the front page story in Friday's paper, while a number of North American business sites picked up the details as well. We provide links to their reports and the full Daily story below.

With the ports of Long Beach and Los Angeles facing problems with expansion of their container terminal operations, the future of Prince Rupert's Fairview Container Terminal continues to look bright.

The addition of a second weekly COSCO ship last month is proving the reliability of the intermodal container delivery network from the port of Prince Rupert into the U.S. Add to that the growing demand of shippers for an alternate corridor and the skyrocketing price of fuel, and the rainy North Coast is looking better than ever to shipping companies worldwide.

Howard Finkel, executive vice president for trade at COSCO Container Lines Americas Inc., said in a recent Journal of Commerce article that the system of uninterrupted rail movement and delay-free customs clearance for the 80 per cent of containers bound for the U.S. has worked almost flawlessly.

Finkel said the operation has "exceeded expectations," with containers often arriving at their destination ahead of schedule.

"COSCO certainly has been very pleased with the congestion free and fluid operations of their vessels calling at the Fairview Container Terminal in Prince Rupert," said Bedwell.

"What is interesting to witness is watching an entire community doing whatever has to be done and their pride taken in doing so, to ensure that their new venture in containerization will be successful."

The first six months of 2008 saw 42,555 TEUs (435,550 tonnes) moved through the Fairview Container Terminal, an average of 7,093 TEUs (20-foot equivalent units) per month. Outbound containers accounted for nearly 50 per cent of the throughput, of which 39 per cent were fully laden for export to Asia.

Weekly container volumes through Prince Rupert have been steadily increasing since early April, from 1,232 TEUs to a record of 2,631 TEUs.

The Fairview partners couldn't be happier with the performance.

The performance is especially good when the increasing volumes are compared to the North American West Coast port trend of container import declines.

"All of the players involved in the Fairview Terminal, from labour and border security services to Maher Terminals, CN and COSCO, have been working collaboratively and diligently to meet shippers' needs and expectations," said Shaun Stevenson, vice president Marketing & Business Development for the Prince Rupert Port Authority.

"As a result, we are maintaining a high velocity in moving customers' cargo from point of origin to destination consistently on time, efficiently and quickly."

The Long Beach docked on July 19, and is the second vessel of a string of five of the new CEN weekly service by COSCO and the CKYH Alliance that began July 8. To everyone's satisfaction, within 24 hours 1,956 TEUs were offloaded and loaded. This is the new service by the Alliance is comprised of vessels up to 8,200 TEUs, significantly larger than the nine 5,400 TEU container ships that make up the first weekly PNW service.

"The container volumes at the Fairview Terminal are continuing to increase almost on a weekly basis while the West Coast trend is a decrease in container imports," said Stevenson.

"This is a validation of the value proposition of the service from shippers provided by this new express trade corridor anchored by the Port of Prince Rupert."