Living Oceans work on their version of observe and conserve 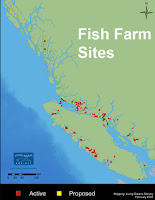 Frustrated at what they see as the Provincial governments inadequate regulations on the fish farm industry in coastal waters, The Living Oceans Society is asking fishermen to act as their eyes on the water this summer.
They are concerned that full and true environmental impact of the farms on the sustainability of the resource isn't being taken seriously by the government.
So with that issue high on their agenda, fishermen across the province are being recruited as intelligence operatives of sorts to help make their case for more proactive regulations out of Victoria.
The organization launched it's campaign on Friday with a press release outlining what it hopes to achieve and what they have in mind for the province's fishermen as they take up their challenge of observation.
The Daily news featured the controversy over fish farm regulations as the front page story in Monday's paper.
FISHERMEN URGED TO KEEP WATCH ON B. C.'s FISH FARMS
Environmental group urging all water users to monitor farms and report any oddities
By Kris Schumacher
The Daily News
Monday, July 14, 2008
Pages one and three
The Living Oceans Society is tired of what it sees as the provincial government's inadequate regulations governing salmon farms across British Columbia, and this summer the group is asking for the help of the public in keeping tabs on inland and coastal waters.
While the government is pleased with the conclusions of their 2007 Salmon Farming Industry Compliance Report for the low numbers of incidence last year, the society is criticizing the report for failing to address the industry's fundamental problems, and says the province is missing the point entirely.
Living Oceans Society says that the glowing report about the province's salmon farms is a result of inadequate regulations governing the industry, with the true environmental impact of the farms not being taken into account.
"The industry scored high on measures that fail to address issues like escapes and the spread of sea lice, disease and waste into the marine environment," said Will Soltau, salmon farming campaign local coordinator with Living Oceans Society.
"The ineffectiveness of provincial regulations was made clear this month when 30,000 fish escaped from a salmon farm and fewer than 1.5 percent were retrieved. What is the use of having regulations that cannot control the major environmental impacts like escapes and sea lice?"
Active salmon farms are checked by Ministry of Environment staff randomly each year, and while infractions could result in prosecutions, fines, or even suspension of an aquaculture licence, warnings are more often issued and very few fines are ever imposed.
"This report deals specifically with the compliance of industry with their aquaculture licences, but in the North Vancouver Island area the marine debris from salmon farms suggests that the industry's compliance is far below what the government's report claims," said Soltau.
That's why this summer the Living Oceans Society has launched the 'Eyes and Ears Campaign'.
The society hopes that by engaging the public, it can more accurately assess the level of environmental compliance than the limited Ministry of Environment resources currently being used.
"We are asking for people on the water and in coastal communities to help us inform the provincial government about the true level of industry compliance by reporting the things they observe around salmon farms to us," said Soltau.
"If fishermen, mariners and the boating public see or hear of anything they feel is negligent or irresponsible, or they catch an Atlantic salmon, we want to know about it."
The Living Oceans Society will verify the evidence they collect and compile a summary to present to the government.
Anyone interested in participating or wanting to report something are urged to contact Will Soltau at 250-973-6580.
Posted by . at 12:24 am