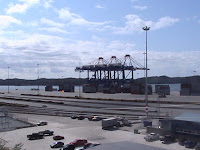 The Prince Rupert Port Authority released is financial statement for 2007 last week and from the numbers delivered, the Prince Rupert waterfront seems on the cusp of delivering strong numbers into nest year.
With container traffic starting to build through this year and more shipping lines expressing interest in the gateway that the Fairview Terminal provides Port officials are quite happy with the progress of business through the Port.
The Daily News featured a front page story in Tuesday's paper that looks at those 2007 numbers and the impressions that Port officials have for 2008.
PORT IS BUOYED BY STRONG PERFORMANCE FOR 2007
Latest numbers show new container facility is already delivering some healthy results
By Kris Schumacher
The Daily News
Tuesday, July 22, 2008
Pages one and three
Even with an initial lag in beginning container terminal operations last year, the Prince Rupert Port Authority was in a financially comfortable place as of Dec. 31, 2007.
The Prince Rupert Port Authority released its 2007 financial statement late last week, and the document reports a healthy increase of almost $14 million in assets from the end of 2006.
Although the year-end surplus for 2007 was $218,603 less than what was banked in 2006, the port remains in overall good financial health, with more than $17 million in investments made to property, plant and equipment during 2007 and $9 million added in assets.
The opening of the Fairview Container Terminal and strong performances by Ridley Terminals and Prince Rupert Grain resulted in tonnage volumes through the Port of Prince Rupert increasing by 35 per cent in 2007
"It was a good year for the port," said Odd Eidsvik, a local accountant and Port Authority board member. "We were disappointed that [container] traffic didn't come along as fast as it was supposed to. But shipping companies sign long-term contracts, and to break those with their present partners would be very difficult, so it took something special to get the traffic going into Prince Rupert."
Eidsvik explained that things were very well done in 2007, considering the original anticipation was to have the first ships berthing in July or August and the first ship didn't arrive until October. That delay, combined with the minimal amount of container traffic, meant there was less than three months of income recorded for the container facility in 2007. Eidsvik said with a full year of operations in 2008, and the probability that container traffic will continue to increase before the end of December, the financial statement for this year will paint a completely different picture.
"The year 2007 really is the year we became a leading trade corridor gateway," said Don Krusel, president and CEO of the Prince Rupert Port Authority. "It was about bringing that container facility into action."
"It's something we have been talking about in this community for what seems like decades," said Krusel.
"What we were selling was speed and efficiency. We said we were going to create the fastest express gateway from Asian markets into the North American. The industry is now talking about the fact that containers moving through this gateway are reaching their destination ... three days faster than the fastest alternative."
Ridley Terminals showed a continued rebound in 2007, shipping 5.09 million tonnes. Prince Rupert Grain also had another good year, shipping in excess of five million tonnes. Last year was also the best year yet for cruise ship activity since the opening of the Northland cruise ship terminal in 2004, with almost 100,000 passengers setting foot into the community.
With a second COSCO container ship now calling at Fairview Container Terminal every week, the terminal is reaching capacity on certain days, bringing the operation one step closer to the ultimate goal of maximum capacity seven days a week.
And with Phase One of the terminal now complete, the Port Authority is looking for the $600 million that will fund the massive Phase Two expansion of Fairview Container Terminal.
.
Assuming container traffic increases, land discussions with First Nations are fully completed and the funds are available, current hopes are to see initial construction of Phase Two begin in late 2009.
Posted by . at 12:29 am