Watch your step going off the back porch! 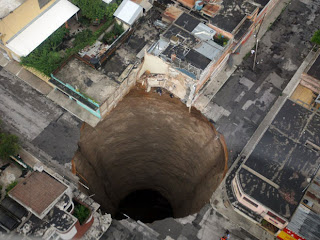 Look down, look way down...

The giant sinkhole, measuring 20 meters deep and 15 wide appeared in Zone 2 of Guatemala City. It is just the latest of natural disasters to befall the Central American nation, which in the last few weeks has suffered a hurricane, volcano and now shifting earth patterns.

Boing boing has the full story and a number of different views of the hole as well as suggestions on how to help out those affected by the string of disasters..
Posted by . at 11:47 am