Sepp's sorry, so sorry and sends his apologies 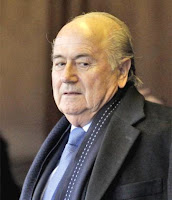 "It is obvious that after the experience so far in this World Cup it would be a nonsense not to reopen the file of technology at the business meeting of the International FA Board in July,"-- FIFA President Sepp Blatter changing direction over his rejection of goal line technology for soccer matches.

With England and Mexico the latest of countries to find some concern with World Cup officiating, FIFA President Sepp Blatter tried to quell some of the complaint today with an offering to perhaps reconsider the idea of goal line observation.

The glaring error on Frank Lampard's goal which was not counted, changed the dynamic of the England Germany match on Sunday Which left Germany ahead 2-1 at the half instead of tied with the English.

While the German's quickly took charge in the second half, one has to wonder if there was indeed a momentum shift in that match after the disallowed goal, leading to Germany's rather text book evisceration of the English game plan.
.

.
Likewise, the Mexican's were justifiably upset over a missed offside in their match with Argentina, a call which seemed to open the floodgates of scoring for Argentina as they eliminated Mexico.

Apparently finally seeing the light of the 21st century the FIFA president has said that considering what they have seen at this World Cup perhaps the time has come to revisit the world of technology.
.


.
His conversion is quickly gobbling up much of the World Cup conversation today.

Montreal Gazette-- Blatter is shamed into U-turn by Lampard's 'goal'
Guardian UK online-- World Cup 2010: Sepp Blatter performs U-turn over goalline technology
Globe and Mail-- Blatter’s opinion is the only one that matters
The Independent-- Federer and Hiddink press Fifa to move out of the dark ages
The Independent-- Blatter admits 'something has to change' as he puts technology back on agenda
BBC Sport-- Blatter apologises for disallowed goal
Posted by . at 7:53 pm