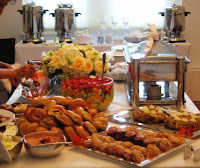 For those who have celebrated at the Seafest Gardens we'll try to talk a little lower this morning as we kick off the weekly capsule of the Podunkian Brunch.

Saturday brought a rather wet and windy Seafest parade down the streets of the city, one which most likely due to the elements seemed a little shorter than usual, though what it lacked in volume of floats and participants it more than made up in enthusiasm as those that did participate certainly earned the appreciation of still fairly sizable audience lining the streets of the downtown area, helping to celebrate the city's 100th birthday at this years parade. The usual fare of shish  kabobs, noodles and such wafted through the downtown streets as locals stopped by to watch some of the scheduled outdoor events that dotted locations around the downtown core. Saturday night was party night at both the Civic Centre, Lester Centre and the city's drinking establishments. With the promise of more challenging weather ahead for Sunday's watefront celebrations.

While we celebrated our 100th birthday there was another milestone celebration in BC this weekend as the Canadian Navy continued to celebrate it's 100th birthday
.
.
. .
.
This weekend in Victoria provided the kind of pageantry that only a military town can provide as 8,000 sailors arrived in Victoria, part of a fleet review and march through the streets of downtown Victoria. The festivities have been going on since the arrival of the first of a number of foreign ships in port, with Saturday featuring a review of the fleet by the Governor General a large number of the ships' companies from those vessels in port also paraded through Victoria and to the legislature buildings.
.
.
.
.
.
.
.
.
Some of the background on the weekends activites was provided by the Victoria Times Colonist, Vancouver Sun and even the English version of the Chinese news agency Xinhuanet.

At such events like Seafest and the fleet review there no doubt will be lots of pictures taken, and who knows what the future may hold from one of those snap shots. The Toronto Star features one of those strange but true stories of a couple that recently discovered that they were in the same photo back when they were but toddlers. Alex and Donna Voutsinas who have been married for eight years, now but in reality it may seem that they've known each other much longer. After going through snapshots of their past family vacations, the couple discovered that when their respective families visited Disney World one year, in a strange bit of fate they both appeared in the same shots on different cameras forever coupled in their respective family albums. Proving that the Disney slogan of it's a small world really is true after all!

On the topic of one in a million events (or in this case 50 million) the Lotto Max super jackpot from Friday night has still gone unclaimed, boosting next Friday's lotto combined jackpot potential to some 95 million dollars, as lotto players will seek out their share of the 50 million Lotto Max Jackpot as well as 45 million in maxmillion jackpots of 1 million each. Be prepared for lengthy line ups at your favourite lotto retailer as Friday approaches. If you're looking to see if you shared in some of the lower range prizes from Friday you can check the winning number list and then reinvest if you wish for Friday's millions.

If you had that kind of cash, you could probably make some travel plans for the World's greatest sporting spectacle, the World Cup currently taking place in South Africa. The football championship of the world takes place every four years and this year's host is stepping out on the world stage with enthusiasm as it welcomes the world to its cities and countryside for the month. While the sport is obviously the key attraction, much has been made of the first such event to take place on the African continent with South Africa taking centre stage of the world's attention.  The Globe and Mail's Stephen Brunt has a sense for these major events, one of Canada's leading journalists he weaves extraordinary tales on many of the pivotal sporting events in Canada and around the world. His work  and that of the rest of The Globe's correspondents won't disappoint and should provide us with a front row seat on all that transpires across South Africa.

As you read over some of their fine work, maybe have yourself another cup of coffee with our Brunch. Did you ever give any thought to the beverage that fuels the nation whether at work, the rink or at home? Well the National Post has providing a fairly interesting review into what makes one of Canada's iconic coffee retailers tick, learn more about what makes Tim Horton's coffee such a Canadian mainstay and essential ingredient to our daily lives.

Our Podcast selection for the week takes us to the CBC once again, where George Stroumboulopoulos offers up not one but two podcast options, an audio link and a video podcast for those that like pictures to go along with their downloads. Stroumboulopoulos has grown well into his post muchmusic days, his CBC interview program features a wide cross section of guests and proves to be rather informative on a regular basis.

And we finish of our brunch for this week back on the theme of parades. It was Stanley Cup parade time in Chicago on Friday, as the Black Hawks and a few million of their closest fans celebrated the recapture of Lord Stanley's Mug for the first time in some 49 years. In one of those rare occassions where Gary Bettman comes up a winner, the team with perhaps the most passionate fans had a chance to celebrate their success, a big win for the NHL which could use a bit of good news of late considering the mess that a number of their franchises in other locations seem to be in.

At any rate, if anyone wants a blue print as to how to host a Stanley Cup parade we suggest contacting Mayor Daley, Chicago put on quite the show. For Canadians that like to think that we don't get a lot of respect, make note of the prominence of the Canadian flag in the colour party, Chicago at least understands that the game has roots outside of the Windy City, a place where Stanley should have a good home at for the next year, just don't get too attached to him!
.
.

.
.
Of course there were speeches to be made, head coach Joel Quenneville who clearly found the parade impressive
.
.
.


And Duncan Keith had a very important question for the crowd.
.
. For our musical selection of the week, we'll salute the Hawks for their hard earned achievement, Canuck fans may wish to turn down the sound, as we suspect that you may have heard the Fratelli's Chelsea Dagger a few times too many during the spring. .
Posted by . at 1:49 am