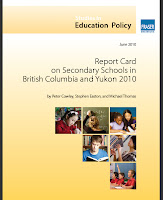 With School District 52 set to combine both Prince Rupert Secondary School And Charles Hays Secondary Schools in the 2011-12 school year, 2010 marks the second to last year that the two schools will be ranked separately in the Fraser Institute's annual Secondary School examination.

The controversial Vancouver based organization, offers up its yearly interpretation of how the province's secondary schools compare with each other, their version of a report card which identifies trends in schools that in their opinion are finding success or are struggling to reach desired results.

It's a process that at times leaves some readers perturbed at the overall results and findings, while others are dismayed at the lack of consideration of outside situations, such as poverty and other social issues beyond the doors of the schools in question that may have an impact on those very results.

For some administrators, teachers and parents these rankings are not considered particularly helpful to the cause of education in the region, while others feel that they are reflective of concerns that need to be addressed.

One thing is certain, the results do tend to draw attention to education and provide no shortage of discussion points, with no clear indication as to what should be done, if anything, with the data that is provided each spring.

This years rankings which were released last week, find that Prince Rupert Secondary has a ranking of 211th overall of the 288 spots considered by the Fraser Institute. That is an improvement over the last five years, in 2005 PRSS was ranked at 239. In the Fraser Institute's rating scale of 1 to 10, PRSS was assessed a rating of 5.1, an improvement from 2005 when it's rating was 4.5.

In the larger breakdown of results, Prince Rupert Secondary had an average exam mark of 65.2, with a failure rate on exams of 12.8 percent. The school's graduation rate was 95.1 while delayed advancement rate was listed as 51.2.

Charles Hays secondary school was ranked with an average exam mark of 60.5, with an exam failure rate of 19.0. The school was listed with a graduation rate of 100, while delayed advancement was listed at 42.4.

Other schools of the Northwest that were listed in the report included:
(Rankings are out of the 288 schools surveyed, ratings are from a scale of 1 to 10)

Queen Charlotte Secondary on Haida Gwaii, which was ranked at 27th overall with a rating of 8.2. There was however no data to reflect back on over the last five years for that school, which may have had some impact on those findings.

Bulkley Valley Christian in Smithers which was ranked at 33 overall, with a rating of 7.9

Houston Secondary in Houston received a ranking of 73, with a rating of 6.9

Smithers Secondary in Smithers which received a ranking of 96, with a rating of 6.6

Caledonia in Terrace which was ranked at 176 with a rating of 5.5

Mount Elizabeth in Kitimat which received a ranking of 260, with a 4.0 rating.

Hazelton Secondary in Hazelton was ranked at 286, with a rating of 1.7.

Nisga'a Secondary in New Aiyansh which was ranked at 288 with a rating of 0.

Overall, schools in Greater Vancouver and Greater Victoria, many of them private institutions, tended to dominate the top twenty to thirty positions on the report, a common theme since the Fraser institute began collecting data from the schools for their annual report back in 1998.

The full Fraser Institute report on Secondary Schools in British Columbia can be examined from a down-loadable file on the Institute's website, beyond the data provide above, it outlines the various categories involved in determining their findings as well as some background on what criteria was used in those findings.

Those inclined to learn more about the findings can compare the Northwest schools with those of other areas of the province, examining such items as grade 12 enrolment numbers, Graduation rates, exam result and failure rates and other aspects of the data provided.