We're building a lake, and it's going to be fake, cause we have an image to make! 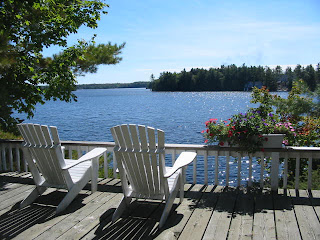 “We’re trying to make a memorable impression, Is it expensive? Well, that’s the cost of doing business.” -- Michael Lawley of Muskoka Tourism explaining why a 1.2 million dollar fake lake is going to be included in the media pavilion in Toronto at the G20 gathering later this month.

So photos (like the one left) just wouldn't be enough we guess?

In what can only be described as a head shaking obvious waste of money, the federal (lucky us) and provincial government (doubly lucky Ontarions!) will be footing the bill reportedly to the tune of 1.9 million dollars so the media contingent that travels to these bureacratic bunfests can enjoy the vista of the Muskoka's without the problem of having to get there (not that they're allowed anyways).

About 2,000 reporters from around the world anticipated to arrive in Canada to cover the G8 and G20 summits later this month, but only 200 will be travelling to the Muskoka's to experience first hand the discourse of leadership all the while why passing the mosquito repellant we imagine.

The other 1800 of the travelling media show will have to make do with the fake lake and the anticipated expressions of dissent in the streets of Toronto, where we suspect that if things go wrong as they have in past G8 and 20 events perhaps the smell of tear gas could be the bug juice of choice.

The latest disclosure of spending excess comes on the heels of the tabulations thus far that security costs of hosting the worlds chatty leaders could top over the 1 billion dollar mark.

In what seems to be some fancy damage control, the Government has since revised the cost of the lake that many think is a mistake, suggesting that the whole thing has been blow out of proportion. Which at this point probably won't stop the runaway train of public opinion about the cost of the big chinwags to come.

There are many more concerns as well beyond the skyrocketing cost of Mr. Harper playing host to the world, the disruptions that seem inevitable now for Toronto and even the usual tranquil Muskoka region have a good number of folks in Ontario dreading the last week of June like no other.

Which all makes one wonder if perhaps the Federal Government missed an opportunity to share their affection for the natural wilderness with the world and save a few bucks along the way.

In a nation with we suspect hundreds of thousands if not a million plus lakes from sea to sea to sea, taking the G8 and G20 leaders to a more distant lake could have served both problems.

For instance lets say they put a finger on their Rand McNally atlas and landed on Great Slake Lake in the North West Territories, that would have given the world's leaders one of those rare experiences of the untapped wilderness of Canada's North, more than likely kept only the most dedicated of protestors or angriest of anarchists away and for 1 billion dollars provided a fair amount of infrastructure for the future use of Yellowknife residents.

Or  if the Territories are not your personal sunspot destination then pick the most off the path location of your choice and insert it into the agenda, in the end the same results we imagine would follow.

The leaders would have much time to discuss those weighty items without any diversions or disruptions, the security apparatus in place would have a definite advantage on anyone with devious agendas and the need to create a lake in a land where many already exist would be just another bad idea that was passed over.

Much has been made recently about the lessons that Canada can share with the world in these trouble financial times, in particular England which is apparently studying our past efforts in debt reduction in order to reign in their own troubled spending agenda.

Looks like the folks running the Summit show perhaps could use a refresher course themselves.

Labels: A lake that's fake may be a mistake