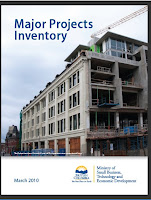 For Prince Rupert it seems that it's a case of everything old is new again, when it comes to the latest listings of the Province's Major Projects review.

A provincial government press release on Thursday trumpeted the great progress at hand in the province as we apparently move forward out of recessionary times and into a new phase of development. Though a quick perusal of the Prince Rupert section of the 132 page document would leave one wondering where the new stuff is to be found, as few it seems are shovel ready at the moment..

Of the seven projects listed in Prince Rupert/Port Edward all have been offered up before as proposals, but somehow remain on the potential list, even though there is little to no progress on many of them.

Among the proposals that still seemingly have a shelf life:

The seven are all familiar themes for the North coast, but for the most part seem no closer to completion today than when they were first offered up over the last number of years.

The most optimistic of reports from the region however seem to come out of Kitimat where the Major Project Review lists ten prospective projects to keep the aluminum city's hopes up.

The full list of all provincial projects can be found from  Ministry's website here, the Kitimat plans can be found on page 118, Prince Rupert's dream list is located on pages 119 and 120.

And while they all look pretty nice on paper, local residents would no doubt be happy if even a few of them looked good beyond the pages of a report.
Posted by . at 11:57 pm

Labels: Show us the projects