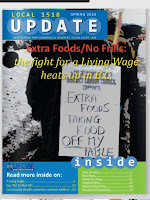 " There is no way we're going to become part of a race to the bottom - we have no appetite whatsoever to see Loblaws (Westfair) once again try and undermine the contracts we have fought so hard to establish with our member's employees," -- Ivan Limpright, President of UFCW Local 1518, responding to the plan of Loblaws/Westfair to change over their Extra Foods brand to a No Frills concept, posted to the union's May website newsletter.

For those that have wandered the aisles over the last few weeks, the end it seems was all but inevitable as shelves emptied and stock diminished, and if all goes according to the outline letter posted in front of Extra Foods, today will be the last day of operations for the Rupert Square based grocery outlet.

A corporate decision by parent company Westfair Foods/Loblaws that will leave Prince Rupert with but two grocery store options for their daily shopping requirements .

The long, drawn out labour dispute over the bid by Westfair Foods to turn the Extra Foods store into a No Frills style store will come to an end as the doors close at the end of business today.

The short note recently posted outside the store provided the company's point of view that after numerous, yet unsuccessful attempts to negotiate on the issue, they now feel that they have no option but to close the Prince Rupert store.

Those negotiations have proven to be rather acrimonious over the last few months as we've outlined on the blog since the issue first percolated a number of months ago.

With the end of the store's presence in the city now within hours, there will be reduced competition in the grocery scene in town and of course a number of new additions to Prince Rupert's already high unemployment rate.

The labour dispute became the focus of UFCW Local 1518's Spring Newsletter, as the union provided their side of the dispute under the larger banner of fighting for the rights of all grocery store employees over the issue.

Among the key points of the Prince Rupert report from the union's newsletter, is a list of what the union calls the "No Frills attack on Prince Rupert", items which include the following:

• Negotiations between the union and Loblaws (Westfair) for the Extra Foods store in Prince Rupert began in July 2009.


• Loblaws claimed throughout negotiations that Prince Rupert Extra Foods was not profitable - but refused to provide financial statements to back their claim.


• Loblaws demanded Prince Rupert members accept their "No Frills" contract demands, or their store would close.


• Loblaws applied to the Labour Relations Board (LRB) twice to force 'final offer' votes of their No Frills contract demands, but in both cases, Loblaws behaviour in Prince Rupert was so bad the LRB ordered the votes not be counted.


• The LRB found Loblaws guilty of engaging in an illegal lockout in Prince Rupert, and ordered them to pay union members the wages & benefits they lost.


• Loblaws was also found guilty of bargaining in bad faith and forced by order of the LRB to provide financial statements so the Union Negotiating Committee could see and understand just what Loblaws was trying to hide.


• It quickly became clear that Loblaws claims about the store losing money were simply not true. But rather than changing their outrageous "No Frills" contract demands and negotiating a fair contract that would work for both Loblaws and its employees, Loblaws once again threatened to shut down the store June 2, 2010.


• There is no justification nor  need to roll wages benefits, and working conditions back the way Loblaws wants to with its No Frills contract.


• The union's commitment to Extra Foods members  remains, and the union will continue to support members fight Loblaws destructive agenda right across B. C.

Some of the key points in the dispute seem to have involved the changing nature of hours of work and salary expectations, according to the unions breakdown the majority of the hours that would be worked in the No Frills concept would be for wage rates of 9 dollars to a maximum of 11.90 per hour, with no benefits.

A few remaining hours would be for wage rates up to 15.75 per hour and by their calculation that would only be in place for two employees in the Prince Rupert store.

From the company's point of view there seemingly has been little in the way of public comment or explanation, short of the letter posted outside the store and the occasional newspaper comment on the situation.

Though one thing seems certain as the hours tick by on this final day, with the Rupert store closing today, the battle lines apparently are now set in the ongoing labour dispute between the UFCW and Westfair/Loblaws, a battle which as we outlined on the blog last month, may yet bring another change to the dynamic of the grocery industry across the nation.

Other posted articles in Podunk on the No Frills dispute:


Other news items on labour relations in the grocery industry