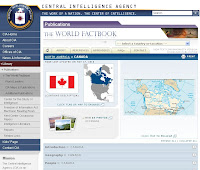 Much has been made of late of the growing numbers of containers arriving and leaving from the Port of Prince Rupert, the Port Authority offering up the stats and finding the interest level and reputation of the Northern Gateway to the Pacific is getting tweaked around the world.

Indeed, the arrival of the Port of Prince Rupert on the world shipping scene has not gone un-noticed along the West coast of North America, as container terminals and ports from Seattle to Los Angeles keep an eye on the growing throughput out of the north coast of BC, occasionally raising the alarm at the growing scope of the "competition".

Yet, one group in the United States seems curiously unaware of the threat to US trade that some say the Fairview container may pose. At least if not unaware, unwilling to tip their hand and their interest in what's up, up on the way to Alaska.

The CIA World Fact book, a rather helpful and popular reference guide to the nations of the world features much about Canada, but when it comes to transportation and trade, Prince Rupert is seemingly the black hole of information.

The website for the World Fact book outlines the transportation infrastructure for Canada when it comes to our oceans, listing off these ports as of some note, Fraser River Port, Halifax, Hamilton, Montreal, Port-Cartier, Quebec City, Saint John (New Brunswick), Sept-Isles, Vancouver.

Nowhere on the list is the Port of Prince Rupert, meaning that perhaps the Jason Bourne's of the current roster haven't had a chance to check things out.

Best be careful if you see someone wandering around town this summer casually taking pictures of the cranes, containers and trains, not to mention probing for further details by asking a few questions.

The Prince Rupert advantage may be but a verbal slip away from revelation and finding itself on the map at Langley, and we don't mean the one in southern BC!
Posted by . at 12:21 pm

Labels: Rupert's not on the map at the CIA