While they look for another Big Bang, there are big bangs happening around the world 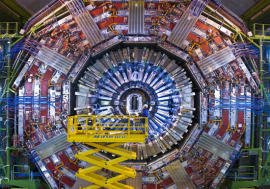 They turned on the Large Hadron Collider today, a deep mysterious scientific project underneath the mountains of France and Switzerland that is something out of an H. G. Wells novel.
I'm not particularly well versed in Scientific matters so to try and explain what this contraption is going to do is a bit beyond my grasp. Something about a a massive particle accelerator 17 miles in circumference, anchored under the Alps that some folks fear may hasten the Apocalypse.
Near as I can tell, the cave dwellers of Europe are hoping to recreate the Big Bang that created the universe, a desire that seems to have more than a few folks scared to near death.
Now while we're sure it's purely coincidental but today's quest for Big Bangs coincided with some of Mother Natures larger bangs of her own.
Now in reality the subatomic particles haven't quite crashed into each other yet, rather they just raced around tubes today, kind of like a gerbil testing out the feeding wheel. But for the folks of Iran, Japan, Indonesia, Vanuatu, Chile and other locales where rather strong earthquakes rattled around today, the timing might seem kind of interesting.
Science must advance, but some of us are hoping that this Big Bang they seek to recreate, won't be the last thing we all hear...
Why the Large Hadron Collider must be stopped
Don't panic: Large Hadron Collider won't spawn voracious black holes
Scientists beaming after test of big atom smasher
Accelerator's test run a "fantastic moment"
Doomsday fears come with territory
Scientists In State, Worldwide Await Results Of Large Hadron Collider
Doomsters’ quark was worse than their bite
Posted by . at 12:57 am