So sit right back and you'll hear some tales, some tales of a brand new port... 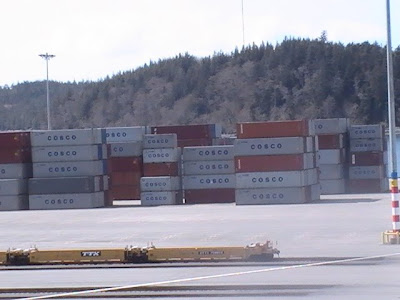 As the Southeast conference delegates arrived in the city over the weekend, Monday was pencilled in as a Port Day of sorts, a chance for the Alaskan visitors to learn more about the Port of Prince Rupert and the future that its developers wanted to share.
The City of Prince Rupert put its best foot forward with an Export Trade Conference on Monday, a primer of sorts for visiting delegates to learn more about those container cranes on the west side of the city.
A number of officials involved with the Fairview container Port offered up their impressions of the kind of growth that could be arriving as Phase Two and beyond of the development progress.
Mark Schepp of Maher Terminals outlined the throughput of the port since the early days of operations, and touched on the potential for southeast Alaskan industries to take advantage of the empty containers that return to Rupert.
Rich Miller of CN Rail, offered up a snapshot of the container operation and its turnaround time to Chicago, while Port of Prince Rupert CEO, Don Krusel, presented the Port as a gateway to northwest America, through his discussion of the ports impact on the Northwest, he looked towards the future as he offered up the prospect of some 1,100 direct jobs associated with the Port by 2017.
Of course the Monday information session in Prince Rupert, also coincided with a rather tumultuous day on the stock market as the New York Exchanges suffered some of their worst losses since September of 2001. That massive drop on Monday points to a downward trend for now, and one that seems to be continuing on into Wednesday, leaving many of the New York money types to suggest that this may be an uncertain time for the money markets.
External world events that may have an impact on those expansion plans or at least impact on the import and export of goods into the primary markets of Chicago and Memphis that the port is in place to service.
That discussion though is probably for another day, Monday was, and this week is about the potential of the Fairview Port to service the Alaska commercial sector, which would most likely still be a beneficial move regardless of the economic storms that are whipping up at the moment.
To that topic the Port provided a thumbnail sketch of what the Rupert gateway might be able to do for Alaska today and into the near future.
The Daily News featured the Port's talking points as their front page story in Tuesday's paper.
ALASKANS HEAR OF RUPERT PORT'S BUOYANT OUTLOOK
Don Krusel speaks at Export Trade Conference while Alaskans gather in Prince Rupert
By George T. Baker
The Daily News
Tuesday, September 16, 2008
Page one
The message is familiar in B.C. but Port of Prince Rupert CEO Don Krusel shared it with thousands of Alaskans yesterday - there is huge export potential through the region's new container port.
For many who took in Krusel's speech Monday at the Lester Centre, it might have been the first time they heard that message. Many in the bleachers were delegates from southeast Alaska, in town for their conference that begins Tuesday.
"We sit on a natural trade corridor for the Asian market but it's really the portal of northwest America," emphasized Krusel.
Monday was the City of Prince Rupert's Export Trade Conference, where a line-up of speakers was invited to discuss the economic possibilities as related to exports through the port.
Krusel pointed to the relative isolation of the city as a strategic benefit instead of a logistic problem, saying that the lack of population along the North Coast allows for a free flow of container traffic on the CN rail system.
Because of the greater traffic flow, the port was able to send its first container train through to Chicago in 92 hours, which Krusel claimed was "unheard of in the industry".
"On average, container trains reach their destination on scheduled time 91 per cent of the time," said Rich Miller, general manager of CN BC Mountain Region.
Maher Terminals of Canada's Mark Schepp said there had been a jump in the number of containers flowing through the port in the July-to-August period, increasing to 11,500 containers moving from ship to the intermodal trains. That represents an increase of 7,500 containers moving through the port from the January-to-June average, which was 4,000 per day.
"What we are seeing is a big increase of empty containers coming back to Prince Rupert," said Schepp who insisted to the delegates that possibilities exist to fill them. Krusel said there could be 1,100 direct jobs created by port activity by 2017, and phase two could be expected to be finished by 2012.
"We have a great community of people wanting to build. It's a strategic advantage for us."
Posted by . at 12:58 pm