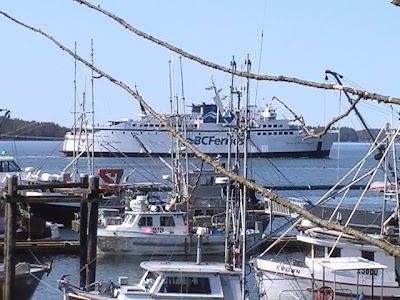 A pair of interesting additions to the BC Ferries Board of Directors and BC Ferry Commission has caught the attention of North Coast MLA Gary Coons, who also doubles as the NDP’s Ferries critic.

Coons picked up on the common thread of two brothers recently added to the Ferry Corporation Board and the BC Ferry Commission, appointments which leave some to suggest that it runs counter to an Independent approach for the province’s Ferry Commission.

The MLA has taken the issue to the provincial ombudsman for further study. Asking for a review of the appointments of Wayne Stolien to the BC Ferry Board of Directors in April and Sheldon Stoilen, who was appointed two months later to be the deputy commissioner of the B.C. Ferry Commission through an Order in Council signed by Gordon Campbell.

Those appointments have given the NDP Ferry critic cause to raise an alarm over the independent nature of the Ferry Commission and his observations continue to provide questions about the entire structure of the Liberal government’s dealings when it comes to the province’s Ferry Corporation.

The arrival of the two brothers on the marine scene has provided for a wealth of reading material on their past history, which makes for an interesting review of their place within the business structure of British Columbia.

Wayne Stolien was once a member of the Board of Directors for Ridley Terminals as well as a past Vice President of Canadian Stevedoring.

Sheldon Stolien, joins the British Columbia Ferry Commission after some time in the aviation industry with Harmony Air as Vice President of Marketing and Sales ( an airline which at one time featured former Liberal finance Minister Gary Collins as President and CEO and suspended its operations in 2007).

He began his days in the airline industry in 1972 when he worked for Canadian Airlines and from there went to Canfor before he flew the harmonious skies with Harmony.

His appointment continues an interesting trend for this government, of moving airline industry executives into the world of maritime transportation. BC Ferry’s President David Hahn, previously held an executive post with Ogden Aviation prior to joining British Columbia’s transportation giant.

The positions recently provided to the brothers Stolien, were described to the Victoria Times Colonist as purely coincidental. And despite the Stoliens’ claim that they never discuss Ferry business - only family business; the prospect of two brothers so closely linked in the always controversial world of BC Ferries provides the potential for some optics problems.

Something that won't be helpful in the ongoing quest for transparency and accountability, that many say is dearly needed when it comes to BC Ferries.

With the recent Liberal decision to abandon a fall session, the opportunity to debate the controversial appointments will have to be done outside of the elected body of government in this province.

The lack of a legislative session and the make up of the Ferry Corporation as constructed back in 2002, provides the Liberals an additional layer of protection from what seems to be their impression of the unnecessary need to actually explain their appointments to any kind of a public body.

The Transportation Minister in the past has made many statements in the Legislature (when the Liberals actually let them open the doors) and outside of it, stating that the current government of the day is dedicated to accountability at BC Ferries and that there is more accountability at the Ferry Service today than ever before, an opinion which some in the province might take issue with.

Last week a pair of Victoria University professors weighed in on the issue of the appointments, with Professor Ken Thornicroft suggesting that the twin appointments from an appearance point of view were certainly not ideal. Professor Eike Kluge, went a bit further and suggested an investigation might be in order to examine the appointments.

Both interesting observations, which might provide for a valuable discussion point. That is if the Liberal government ever returns to actually conducting its business inside that elected Legislature we have and not through sound bites, press releases and staffing announcements that seem to lift more than a few eyebrows.
.
The Daily News provided some background on the MLA's concerns in Wednesday's paper.
.
MLA queries role of BC Ferries' board brothers
Gary Coons asking whether duo should be making decisions
The Daily News
Wednesday, September 17, 2008
Page Three
.
North Coast MLA Gary Coons has launched a complaint to B.C. ombudsman, Kim Carter, Tuesday outlining his concern about the naming of two brothers to two BC Ferries boards.
.
Coons, who is the NDP's critic for ferries, wants Carter to look into the appointment of Sheldon Stoilen, of Bowen Island, to the deputy commissioner post of the B.C. Ferry Commission, and his brother, Wayne Stoilen, of Delta, to the board of directors of B.C. Ferry Services Inc.
"Simply put, you have one brother asking if ferry fares can be raised and the other brother saying yes," said New Democrat ferry critic Gary Coons in a letter to Kim Carter, Ombudsman for British Columbia.
BC Ferries was corporatized by the provincial government in 2002 and works under the supervision of the BC Ferries board.
In conjunction with the corporatization, a ferries commission was created to approve fare increases and monitor service issues.
In August, BC Ferries changed the popular Skidegate-to-Prince Rupert service from a Thursday night sailing to a Friday morning sailing, which enraged residents and municipalities on the Queen Charlotte Islands, who were concerned that they would have to leave their homes at 3 a.m. to catch the 6 a.m. ferry.
Coons said Wayne was appointed to the B.C. Ferry Board of directors in April, while his brother, Sheldon, was appointed two months later to be the deputy commissioner of the B.C. Ferry Commission through an Order in Council signed by Gordon Campbell. Since that time, B.C Ferries has requested an approval for a dramatic increase to ferry fares through a fuel surcharge. That request was approved in July by Sheldon Stoilen as the Deputy Commissioner.
.
He wondered in the letter how the commission will work if the two brothers are both in charge of ferry pricing and scheduling issues.
"Ferry fares have skyrocketed under the Campbell government, and the promise of an independent ferry commission has been broken," said Coons.
"Coastal communities who have been hammered by wave after wave of fare increases have been abandoned by the Campbell government completely."
Posted by . at 11:51 pm

Labels: BC Ferries, BC Ferry Commission