And for dessert, perhaps some Friendship Cake! 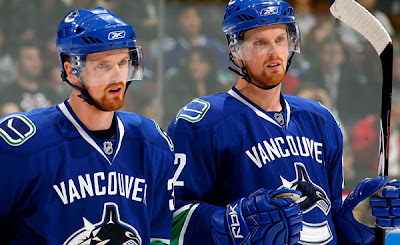 Vancouver General Manager Mike Gillis finally got around to touching base with the Sedin brothers, the first time he’s apparently had a face to face since taking over the Canucks earlier this year.
Gillis and the Sedin boys had dinner together on Wednesday, perhaps to compare notes on the status of their contracts, or maybe to go over the plan of attack for the 2008-09 season.
.
Whatever the conversation topics may have been, Gillis clearly had to do a little fence mending after getting off to a rough start with what now are the two of the few recognizable names left on his roster. At the time of his arrival as the new sheriff in Canuckland, Gillis basically suggested that the two Swedes, in his mind, were not first line players, a statement that left the twins feeling a tad unwanted.
That of course was before the Canucks started shedding many of their first line players and neglected to find the same brand of player to fill in on the roster sheet.
.
In fact, as Gillis conducted his thus far unsuccessful wooing of Mats Sundin, fewer and fewer first line options presented themselves to the Canucks, making the return of the Sedins’ an even more urgent event, though you have to wonder exactly how they might of felt over the summer as they digested the opinion that their new boss wasn’t particularly impressed with their potential.
.
As the went from the main course to the dessert table all seemed to flow smoothly, with the two sides finding each others company enjoyable and the atmosphere conducive to kind words upon the end of the first supper.
.
It’s a bit of damage control that Gillis probably should have handled much earlier than this, especially as the Canuck roster begins to make the locals pine for the call ups of last year from the Manitoba Moose, at least they had an idea who some of those fellows were.
.
The Vancouver media, frustrated at the lack of name power donning a whale jersey this season, weighed in with their meal reviews, leaving Canuck fans to digest the developments and ponder whether the Sedins are part of the bigger picture or just the bridge between the Nonis and Gillis eras.
.
Vancouver Sun-- Will Gillis learn to love the Sedins?
Vancouver Sun-- Sedins feel good after meeting GM
Vancouver Sun-- Sedins, Gillis to finally break bread
Vancouver Sun-- Meet the boss: Sedins, Gillis to talk
Vancouver Province-- Gillis has one option with Sedins
Vancouver Province-- What's at steak for the Sedin twins
Vancouver Province-- Twins ask Gillis 'Where's the beef?'
Metro-- Gillis in tough with Sedins
TSN-- Gillis and Sedins talk, but not about contracts
.
The above item first appeared on the HockeyNation blog, for more items about hockey check it out.