A drop at the pumps, doesn't mean a drop on the boat 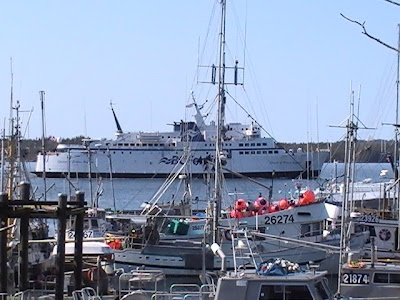 BC Ferries is holding the line for the moment on those controversial fuel surcharges put in place when the price of fuel skyrocketed earlier this year.
Despite some relief on the national oil markets, Ferry President David Hahn says that the Ferry Corporation can't just drop the surcharge that quickly, suggesting that BC Ferry passengers may be paying the extra premium for a number of months yet, since BC Ferries didn't impose it early on when the price of oil went up.
This despite the drop in the world price on oil from 147 to around 100 dollars this week.
The CBC provided details on the new math at BC Ferries posted to their website.
BC Ferries maintains fuel surcharge, despite drop in oil prices
Last Updated: Friday, September 19, 2008 12:36 PM ET
Comments43Recommend17
CBC News
BC Ferries passengers will get no immediate relief from fuel surcharges, despite the falling price of oil, president David Hahn said Thursday. (CBC)
BC Ferries passengers will likely have to pay a fuel surcharge for several more months, even though the price of oil is dropping, the president of the corporation told CBC News on Thursday.
Earlier this week, both Air Canada and WestJet announced they would be dropping fuel surcharges and lowering extra baggage fees after the price of oil fell to the $100 US a barrel range, down from a high of roughly $147 US in July.
At the pumps, the price of gasoline in B.C. continued to drop, with many stations across the province selling below $1.30 a litre, down from more than $1.50 earlier in the week.
But BC Ferries president David Hahn said falling oil prices don't translate into an immediate surplus of cash for the company and there are no plans for immediate price cuts.
"I think the difference between BC Ferries and the airlines, is they can make those changes overnight," said Hahn.
Since August, BC Ferries travellers have been paying fuel surcharges of between nine and 18 per cent on the price of tickets to help the corporation cover the rising price of oil.
Rollbacks possible later this year.
The provincial corporation does plan to re-examine the fuel surcharge at some point and to roll part of it back later this year or in early 2009 if the price of oil remains low, said Hahn.
The company is playing catch-up because it didn't implement the fuel surcharge until after prices had peaked.
"We never collected for the earlier price of fuel … When it was $140 [US] a barrel, we didn't have a fuel surcharge," said Hahn.
The new charges were introduced just four months after a fare increase and angered many people living in ferry-dependant communities.
Bob Lalonde, chair of the Bowen Island Ferry Advisory Committee, said he hopes BC Ferries will take a hard look at the fuel surcharge in light of the falling price of oil.
"This is a relatively new occurrence, so I would expect the Bowen Island Ferry Advisory Committee, along with all the other advisory committees will take steps to see that this is done," said Lalonde.
BC Ferries Services Inc. is owned and run by the B.C. government.
Posted by . at 12:27 am

Labels: BC Ferries keeps fuel surcharge on despite dropping price of oil