By default, we may soon own a pulp mill 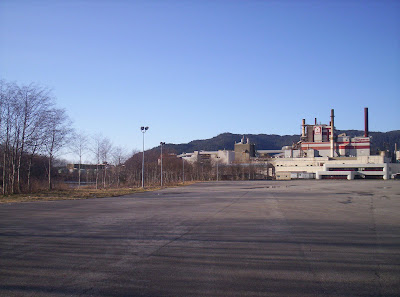 Pssst, wanna buy a pulp mill? The property needs a little TLC and a few modifications to the machinery, but if you can find the trees, the cash and the steel nerves to enter an industry under stress in troubled economic times, then there’s a place for you on the North Coast!

Prince Rupert’s longest running soap opera took another twist this week as the Watson Island Pulp Mill once again became a conversation piece for the city’s municipal government and the always inquiring residents of the North Coast.

The Mill which has been orphaned a couple of times over the years in its colourful history, began wandering down the financial path Monday that could see it become one more land holding to be found in the City of Prince Rupert portfolio.

With no sight of a Sun Wave representative anywhere near Prince Rupert in recent times, and the property having fallen into tax default on outstanding property taxes, the mill with a six million dollar price tag was put out for auction on Monday. It was an offer which apparently could be refused, as the tax sale did not find many takers eager to enter the challenging world of pulp and paper making on the North Coast.

Sun Wave, the mysterious not quite operators of the mill still however, have time to reignite their interest in the property. The tax sale process now starts the clock for them, giving the group which answers to corporate and political masters in the Chinese government, one year to settle up their debts. If they don’t’ come up with their outstanding taxes in 365 days, then the City of Prince Rupert will inherit the mill.

The Tuesday Daily News featured a front page headline report on the latest developments on Rupert’s most enduring story.

City in line to take over ownership of pulp mill
By George T. Baker
The Daily News
Tuesday, September 30, 2008
Pages One and Two

It looks as if there is little appetite to own a pulp mill in Prince Rupert.
On Monday, city hall hosted a 'tax sale' in which the long-standing pulp mill on Watson Island was one of the properties put up for auction at city hall. There were no takers for the mill.
"I've always wanted to own a pulp mill," joked Mayor Herb Pond at the tax sale. Because there were no bids on the baseline $6 million price tag, the Sun Wave-owned pulp mill was defaulted to the city.
Municipalities host annual tax sales on properties whose owners have defaulted on their property taxes.
The Sun Wave group has not lost the mill yet, it now has one year to pay off its tax debt if it wants to stop the mill from being inherited by the city.
Pond said that the best outcome for the city was hard to define because the city would be pleased to receive the money owed in back taxes but would also be interested in seeing the site become active and wealth-generating.
“In the end, what we really want is somebody who will make great use of that site,” said Pond.
Sun Wave had signed a sweetheart tax deal with the city contingent on it getting the mill up and running by Jan. 1, 2008. That did not happen.
City council discussed the issue in camera in January and made a short statement after passing a motion during the regular council meeting. The motion brought to an end the controversial agreement that gave Sun Wave tax-free status for five years, provided it opened the Watson Island facility for the purpose of producing pulp and was employing local people.
Under the agreement, Sun Wave was expected to make a contribution to the city in those first five years. According to the city, it agreed to make a contribution of $100,000 in 2007.
After the first five years, Sun Wave would then have paid taxes based on a complicated formula that took into account the price of pulp, production levels and the Consumer Prince Index.
While they are not the main player in collecting the outstanding dollars owed, the district of Port Edward is also affected by the tax sale.
Port Edward municipality is entitled to taxes for the power it supplies from its dams in both Diana and Taylor lakes, and for the pipeline that feeds the site.
“Right now, there is no real benefit for the District of Port Edward from the City of Prince Rupert owning the pulp mill property in a year,” said Port Edward Chief Administrative Officer Ron Bedard.
Posted by . at 11:41 pm