Now if we could just get them on the streets tonight 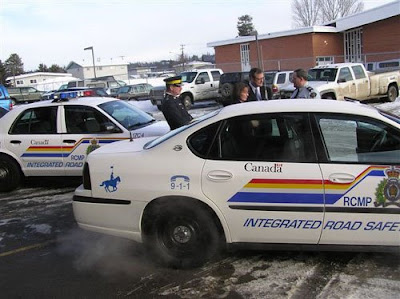 With Prince Rupert residents wondering how to combat the rise in crime in the community, the common refrain is to put more officers on the streets.
It's a move that seems to be a little complicated here at the moment due to budget constraints in the city, and the current civic manipulated short staffing situation at the local detachment.
However, if the day ever comes that we increase the complement of constables eager to serve and protect us, perhaps one or two of the locals who attended an RCMP information session on Tuesday and wrote the RCMP entrance exam on Wednesday night will be taking to the streets for us.
The Daily News had details on the RCMP recruiting drive in the region in Tuesday's paper.
Officers of tomorrow can start on careers today
By Kris Schumacher
The Daily News
Tuesday, September 09, 2008
Pages one and five
Anyone in town who has ever thought about a career in law enforcement can have all their questions answered tonight at an RCMP Career Information Session.
An RCMP Recruiting officer will be at Northwest Community College to talk to members of the public at 5:30 p.m. today, with an entrance exam available for everyone in attendance that will be sat tomorrow.
Community Policing Officer Constable Krista Vrolyk said there has never been a better time for people to apply to be part of the RCMP because cadets now receive a $500 weekly living allowance in addition to their education.
Constable Richard Holdenried is the newest member of the Prince Rupert RCMP - he worked his first shift last week - and he said he is excited to apply everything he learned during his training at RCMP Depot to his work within the community.
Originally from Calgary, Alberta, Const. Holdenried also has previous experience as an Auxiliary Constable, but he said nothing can really prepare somebody for the 24 weeks of intensive training that recruits get in Regina, Saskatchewan.
"You get there and everything is overwhelming for most people," he said. "You're usually waking up at 5:30 a.m. every day, making sure you're room is spotless and everything is in its place. The food in the mess hall isn't bad, despite what people say. Then at 8 a.m. you officially start your day, and it's a varied schedule. They try to keep you interested as long as they can, so you're not sitting down for eight hours at a time."
Classes can range from studying law inside a classroom, to firearms training, self defence tactics, motor vehicle training or physical exercise such as running. Recruits are divided into troops, a full troop consisting of 32 people, who complete training and graduate together after the 24-week program. Holdenried said that his troop lost four members during that time, but gained two more before its completion.
"I think two of the people had to leave due to some family issues, and they're already back in training at depot," he said. "It can be tough for some people, especially those who come from the East Coast, because they can't really go home during those six months."
"The first week is always the hardest, but once you're there the weeks fly by."
The RCMP Information Session will start at 5:30 tonight in Room 186 at NWCC, and will be followed by an RCMP Entrance Exam tomorrow, Wed., Sept. 10 at 5:30 p.m.
Everyone is welcome to attend the information session, but those interested in applying by writing the entrance exam should be a Canadian citizen of good character, proficient in English or French, have a Canadian high school diploma or equivalent, possess a valid Canadian driver's licence, and be 19 years of age by the time of engagement, or 18 years of age when applying. Successful applicants will be required to meet medical and health standards, be willing to serve anywhere in Canada, and be physically fit.
Posted by . at 10:20 pm