We were oh so close to an airport bridge!!! 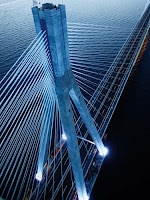 If only a slip of the tongue could result in a bank deposit slip.

Tuesday's meeting of federal, municipal and airport officials made for much in the way of merriment as any cheque presentation can bring, but when Transport Minister John Baird offered up his cash donation for investment in the local airport, the city must have thought for a wee moment as though they had won the lottery.

TV 7 featured the announcement on the Tuesday newscast, which included the Transport Minister adding a few zeroes to the final cash donation, all be it, for  a brief moment to the presentation.

Quickly catching himself, they clawed back that cash before the city had a chance to put a bridge design out to tender.

Oh well, progress is always in increments, today a snow plow, maybe tomorrow they get the bridge..
Posted by . at 11:46 pm