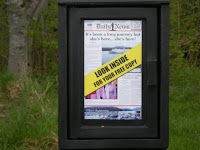 An Alberta based website, Troy Media, has scoped out some more commentary on the recent seismic shift in the newspaper industry in western Canada, which among the changes featured the closure of two BC dailies the Nelson Daily News and our own Prince Rupert Daily News.

Chief Operating officer Rick O'Connor continues to be the spokesman for the Black Press organization, recounting for Terry Field of Troy Media, some of the background  that led to the decision to close the 99 year old publication in Prince Rupert and what the blue print may be after Friday's closure date of the Daily News.

The key portion of his thoughts on that topic from the Troy Media website:

O’Connor told Troy Media that Black Press wasn’t keen on owning either the Prince Rupert Daily News or the Nelson Daily News as well as several others but taking control of them was part of a recent purchase of 11 newspapers overall owned by Glacier Media. The closings will not affect the Trail Daily Times, a newspaper O’Connor says has strong community support and a solid business record.


According to O’Connor, the circulation for Prince Rupert Daily News is about 750 paid customers, while Nelson’s daily has about 2,000 subscribers. Those modest numbers, combined with a more challenging environment to attract advertising dollars, means the papers aren’t viable, he says.


"When you put everything together the business model is not sustainable.”


Black Press already owns weekly newspapers in both Nelson and Prince Rupert. The Nelson Star will become a twice-weekly product with one additional reporter, while the Northern View, which focuses on Prince Rupert, will also add a reporter but continue as a weekly. Its sister newspaper, the Northern Connector, a regional paper that includes Terrace and Kitimat, will also remain a weekly, allowing for a twice a week publishing cycle overall for Black Press in Prince Rupert.

Over the course of the last week, Prince Rupert city council expressed their own concerns over the sudden change to the local print media landscape, seeking answers from the management of Black Press, and if the commentary from the Troy Media site proves to outline what will transpire, the Mayor and council may soon have some of those answers.

Jack Mussallem is the mayor of Prince Rupert and his concern is mostly for the “jobs lost” when the paper shuts down. The port city has had a rough few years surviving a substantial drop in population, and jobs, as the result of pulp and paper mill closures. He says the community is slowly bouncing back largely because of activity in relation to its port.


Black Press is sending some senior staff to Prince Rupert in the days ahead to share plans for its weeklies with the mayor and others, and O’Connor believes the community will be better served by weekly papers that are stronger financially.


Mussallem is also concerned that the number of “local articles with a local focus” will be lost with the demise of the daily newspaper, a concern that is shared in Nelson as well; as is the question of the quality of the news content that will produced now in markets where there is no competition.

The full article examines where the new press barons of Prince Rupert feel the direction of the news business is heading and how they plan to tackle the challenges of the past as they move their blue print into the future.

You can read the entire article here.
Posted by . at 3:15 pm

eToro is the ultimate forex broker for beginning and advanced traders.