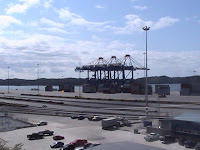 While we haven't heard much on the schedule of Phase Two expansion for the Prince Rupert Port Authority's container plans of late, terminal partner Maher Terminals, the operators of the Fairview container port are certainly eager to spend some money.

The National Post reveals that the New Jersey based shipping group has laid out its investment plans for the Port of Hawkesbury Nova Scotia, which will see the company become a shareholder and operator of the facility when it opens in early 2013.

In fact, Maher's success at the Fairview terminal seems to have provided a blue print of sorts for the Nova Scotia terminal to be called Maher Melford terminal, Paul Martin, the president of Melford International Terminal Incorporated outlined the plans for the terminal as "in many ways, an East coast version of Prince Rupert."

However there will be a change in focus of the trading routes for the Nova Scotia version, Maher Melfort intends to seek out shipments  from Europe and from the rising economic powers of India and Southeast Asia, the Prince Rupert facility thus far has been singularly focused on China.

The first phase of the 350 million dollar terminal will be expected to attract 1.5 million TEU's to the Port Hawkesbury port, a volume which would push it far ahead of nearby Halifax and move it towards the level of Vancouver which handled 2.1 millin TEU's in 2009.

By comparison the potential  yearly volume of the new Nova Scotia terminal would leap frog it ahead of Prince Rupert, which has a current potential top end volume for Phase One of 500,000 TEU's a year.

The operation of the proposed Nova Scotia terminal will resemble much of the Prince Rupert blue print, with CN providing the on dock rail facility and transportation link into Central Canada and on to the southern and midwest US.

It will however feature one thing that Prince Rupert currently does not, a 1500 acre logistics park, which could see other investment in the area to complement the new port.

While attracting Maher as a significant investor and operator is helpful, there are still concerns over whether the terminal will come to a completion phase, numerous delays and funding shortages have kept the terminal more of a proposal than a fact, though many suggest that the interest from Maher certainly moves the plan further along towards a construction date.

For Prince Rupert the opening of yet another rival port will certainly provide some challenges in the seemingly aggressive and competitive world of shipping loyalties, as container lines fine one more bargaining chip soon to be on the table.

Still to be heard from and of greater importance to the North coast however is work of a more firm plan for the Port of Prince Rupert's own expansion options, it will be of interest to learn how, or if the Maher decision to invest closer to it's New Jersey base will have an impact on any future expansion plans at the Fairview location here.