Will the United States play hardball when it comes to the Port of Prince Rupert? 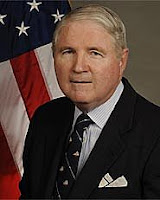 As any good baseball fan knows yet another season has come upon us, but it seems that it's not only in the ball parks of America where some good old fashioned hardball may be set to get under way.

When it comes to the impact that Canadian ports are having on the port infrastructure of the United States, there may be some fast moving bean balls  coming Canada's way in the near future.

Richard A. Lidinsky Jr. is the Chairman of the Federal Maritime Commission in the United States and it seems that the  growing threat of Canadian ports and in particular the future expansion plans for the Port of Prince Rupert have been weighing on his mind of late.

Mr. Lidinsky recently addressed the House of Representatives Committee on Transportation and Infrastructure,  a session which featured his delivery of an eleven page written testimonial review of the state of the American shipping industry and the work yet to be accomplished by his Maritime Commission.

Of interest to proponents of the Port of Prince Rupert and its expansion plans will be the last portion of page six, a section of his speech where Chairman Lidinsky outlines the concerns over what are called "Foreign Shipping Practices".

To that end he advises how the Commission is monitoring the diversion of  U. S bound container cargo to Canadian ports and away from U S Ports, an issue which has become a major issue for the ports of Washington, Oregon and California.

His words to the House of Representatives Committee offer up an indication of what the future may hold for Canada and in particular for the Port of Prince Rupert, as it seeks to continue to grow its brand and increase its throughput into the heartland of America.

Two years ago, Canada opened a new container port in Prince Rupert , British Columbia. The Port of Prince Rupert, its vessel-operator customers, and the Canadian government have begun an advertising campaign promoting that Canadian port as the most efficient and cost effective gateway for cargo destined to the US Midwest and beyond. West coast ports in the United States are already feeling the impact of that diversion. Yet Canada has said they expect to multiply capacity at Prince Rupert from the roughly 265,000  TEU's that they received in 2009 to between 1.5 to 2 million TEU's by the end of 2010, and perhaps to 4 million TEU's by 2015. United States destined cargo moving through Canadian ports avoids both the U. S. harbour maintenance tax and parts of the US container security regime. We are consulting regularly with U. S. ports and examining the issue of potential unfair practices that would shift U. S. cargo from U. S. ports to Canada. We also have reached  out to U. S. Customs and Border Protection (CBP) to discuss and address any potential security impacts.

It would seem that as the level of success that Canadian ports have moves forward at the expense of their counterparts below the 49th parallel, the prospect of protectionism will grow exponentially. In an era where the American economy is struggling, it probably wouldn't take to much to spur on the House of Representatives and the Senate to offer up some ideas as to how to remedy the situation.

The Chairman's interest in exploring potential unfair practices and security impacts does give one the impression that a chill could soon come to cross border container traffic if the push comes from American ports. What impact that might have on future development plans for the Port of Prince Rupert is one of those unknown questions at the moment.

Richard A. Lidinsky Jr. was nominated to his post by President Obama and confirmed as Chairman by the Senate in July of 2009, he will hold his current post until June 30, 2012, so his may be a name that Prince Rupertites hear much more of in the months and years to come.

We no doubt will know him when we see him, he'll be the guy coming to the plate carrying that big bat!

LOL, well at least you're a loyal reader!

yes i am ,,you are a real smart guy,and obviously dedicated..hope you don't mind if i tweak you on the anti american stuff..seems,on occasion, that you slip from journalist to commentator and your bias shows..sorry about the beerbasted rainsoaked stuff,,i lived in rupert 30 yrs ago and am still hungover and toweling off..

This seems typical of the times. Everybody wants to find a booggey-man. So Canada and Prince Rupert get to take the heat.

I'm sure this is also being whipped up by Seattle based shippers whom are worrying about how to keep its stranglehold on the Alaska shipping market as well. Just when fishing companies were eyeing Southeast's proximity to Rupert and the big pond.

instead of addressing their inadequacies, these ports attack the more efficient competitors such as Rupert. I guess it's time to batten down the hatches.

I hate these periods of jealousy and fear - they do so little for fair trade.

Let's see, container handling facility in Prince Rupert run by a US Company. Some one is pushing this guys buttons to use the US vs Canada to get there corporate numbers up.