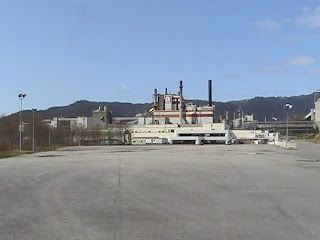 Before we throw last weeks Northern View into the recycle bin for the next trip out to the Recycling Centre (providing they will still be open on the Saturday we arrive), we must take a quick look at a recent item of interest found on those pages about everyone's favourite coffee time topic, the fate of the Watson Island site.

In this most recent edition of the weekly paper, Dan Rodin, the City's Chief Financial Officer offers up some interesting observations on the current status of the  much discussed industrial site, outlining how in his opinion and we imagine that of our council of six and Mayor of one, the current financial burden of the site "isn't significantly impacting the budget because of where it is coming from."

Near as we can tell, this lack of "budgetary concern" as it was described in the Northern View headline, stems from the fact that the city is paying the tab on maintenance and such on the site out of reserves and not from anticipated tax revenues, seemingly an accounting procedure that takes money from the civic cookie jar, piggy bank or rainy day fund, as opposed to the usual budgetary accounts.

And while accounting students might appreciate the concept of such a measure, those taxpayers that fund the respective accounts in question might find the idea troublesome and worthy of a question or two.

After all if you're taking money out of reserves, it's still money that isn't there any more and eventually should be replaced, thus money is still going out of the nest egg, as opposed to staying in place collecting interest on behalf of the city, or being added onto for other more direct and important emergency situations that the city may face.

With the recent tough decisions made to local funding for community groups, increases in fees for services and the recently announced tax burden shift, redirecting the tax increases to come more towards the home owner than other sectors, it would seem that the ongoing costs of Watson Island may be having an impact of some nature on the city's financial planning. As it seems at the moment, the city isn't using these "reserves" for relief for the key concerns of the city's residents, instead that money seems now earmarked for what seems to be a growing money pit for the city.

Back when the Watson Island site returned to city hands, the prospect of a quick sale seemed high. With six bids in hand in December, Mayor Mussallem at the time told the Northern View that of the prospect of a sale, that he was " most optimistic person in Prince Rupert."

It since would seem that we've pulled back on the optimism, especially in light of the rejection of all six bidders and the current items of concern between the City and Sun Wave that are in front of the courts.

The most recent figure of $1,007,000 now budgeted for maintenance and fees for this year ( one does wonder if that includes the current legal process taking place with the former owners, or is that money coming from yet another cubby hole in the financial cabinet?) for the old pulp mill site isn't something that Rupertites most likely expected to have to be paying for when the recalcitrant Sun Wave folks tossed the city the keys back in September.

Yet now almost seven months later, the City is still paying the maintenance costs, while we seem further and further away from making a sale than we have been since this whole drama started

In fact the closing item of the Northern View story seems to be preparing Rupertites for the possibility that this process may go on for a while longer yet, as the CFO explains the current state of the Island's fate, “If we are fortunate enough to sell Watson Island this year, as of the date the property changes hands it becomes taxable…It’s speculative to say what the impact of that would be because it would be speculative to say when it will sell or what B.C. Assessment will deem the value to be.

Mr. Rodin went on to explain that all financial projections would of course change upon a sale! "If it sold tomorrow, we would have a very different budget than we have.”

Considering the recently announced changes in civic fees, grants and of course taxes, all of which have proven to be controversial, local residents concerned about the current financial picture in the community, might be inclined to hope that the city's time line for a sale is much sooner than later!

After all you can't take money out of the cookie jar or from under the mattress forever, eventually you find that each handful of cash takes you closer and closer to having nothing left for other emergencies and then where do you go?


During budget discussions the topic of costs associated with Watson Island and their financial impact was a point of interest for councillors, with $1,007,000 budgeted for maintenance and fees for the old pulp mill site for the coming year.

But, said Chief Financial Officer Dan Rodin, the money going to Watson Island isn’t significantly impacting the budget because of where it is coming from.

“Operationally Watson Island isn’t affecting us that much. We’re not using taxes or fees to pay for that property because the money is coming from reserves,” he said, noting that the City has been “very careful not so spend money from the anticipated taxes” from the mill.

“This budget is not tight because of Watson Island, the money from that is coming from reserves. We’re spending as though that is not an impact on the budget…The bind we’re in now is not because of the costs associated with Watson Island,” added councillor Sheila Gordon-Payne.

And although Watson Island is still the subject of legal disputes between Sun Wave Forest Products and the City of Prince Rupert and a deal for the sale of the land has not been reached, Rodin said the budget could be amended if a buyer is found.

“If we are fortunate enough to sell Watson Island this year, as of the date the property changes hands it becomes taxable…It’s speculative to say what the impact of that would be because it would be speculative to say when it will sell or what B.C. Assessment will deem the value to be. If it sold tomorrow, we would have a very different budget than we have.”
Posted by . at 3:49 pm