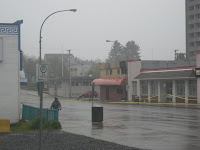 Roads are blocked and traffic has been re-routed along a stretch of 2nd Avenue West in the city as Prince Rupert Fire Rescue puts the finishing efforts on an early morning alarm that has caused significant damage to a downtown apartment building.

The building known as the Epicurean building caught fire in the early hours of Friday morning, adding to the list of downtown structures that have suffered a similar fate in recent years.Friday morning's fire is located just one block away from last years fire at the Inlander on the same street.

RCMP members have blocked off the Avenue and surrounding area from Tim Horton's at 6th Street to the Daily News at 7th, as fire hoses criss cross along the avenue while the PRFD pours water on the building which once was known as a restaurant, but now is mainly known for its apartments on the upper level.

No details have been released yet as to the nature of the fire, or to the status of the residents in the building at the time of its start. Likewise, no information has been released regarding the damage to the building and how it may reflect on its future use.

The early morning call would appear to be the first time that the Fire Department's newly arrived fire vehicle has been put in operation on a major incident. The local community portal hackingthemainframe had the first reports of the early morning blaze and offers up a picture of the Fire Department at work at the most intense moments of the fire.
.
Update: 10:30 am -- The Northern View offers up some information from the fire scene with a report posted mid morning on Friday.
Posted by . at 7:35 am