Ambitious plan for the future revealed by Port Authority 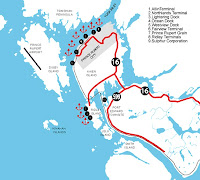 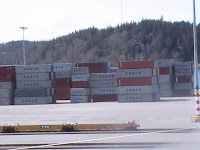 Don Krusel came bearing glad tidings of the present and offered up thoughts of an even better future on Wednesday.

Appearing in front of a very attentive audience at a Chamber of Commerce function on Wednesday afternoon, the Prince Rupert Port Authority President and CEO provided a positive update on the success of the various facets of marine transportation on the north coast thus far in the year.

Krusel pointed to the Fairview container terminal, which thus far, is featuring an 86 percent increase in throughput over the first three months of 2010, while overall traffic through all of the ports facilities at Prince Rupert Grain and Ridley Terminals is up by 76 per cent, leaving the Port Chairman to suggest that if current levels hold true, 2010 could be the best year ever in the history of the Port of Prince Rupert.

It was with those optimistic thoughts bouncing around the luncheon that he then outlined the results of a study into the potential future of the Port of Prince Rupert facilities, providing an ambitious blue print of sorts of development, which if followed through on would certainly find the Port becoming the main economic engine of the region and set the City of Prince Rupert up for some remarkable industrial growth.

The centre piece of all of that development would be the Ridley Island industrial site, which would feature a number of high profile developments to change the nature of our current economic situation. Among some of the potential plans are a rail loop around Ridley Island, a bulk terminal, a general cargo terminal along Porpoise Harbour, logistical services near Kaien Island as well as the diversification of the existing terminals and secondary industry.

An outline of Mr. Krusel's talking points was provided on the Port Corporation website as well as a  full review of the future vision for the Port of Prince Rupert which be found in the economic impact study posted to the site as well.

Should these developments move forward in a timely fashion, the Prince Rupert of today could very well look significantly different than the one that could evolve from the spurt of growth that would seem unprecedented in recent times.

Direct employment and spin off opportunities, as well as ancillary growth opportunities stemming from such economic expansion, might finally give locals some belief that the much talked about boom years were to finally arrive, though at the moment, we still seem more than a few years away from even the start of the realization of such expansion.

CFTK TV 7 featured some details of the plan outlined to the Chamber audience on Wednesday, while the Northern View featured a full report posted to their website shortly after the session ended.

Prince Rupert Port Authority president and CEO Don Krusel was the guest of the Prince Rupert and District Chamber of Commerce on April 21, and unveiled not only projections for the coming year and an economic impact analysis for the port authority but an ambitious plan for the growth of the port in the next decade-plus.

“If things hold steady, we are projecting that this could be the best year in the history of the Port of Prince Rupert.”

But, said Krusel, the Port Authority is not content to rest on its laurels and is planning significant growth at the Ridley Industrial Site as part of its Gateway 2020 vision. That vision includes a rail loop around Ridley Island, a bulk terminal, a general cargo terminal along Porpoise Harbour, logistical services near Kaien Island, the diversification of the existing terminals and secondary industry.

“We have delivered on speed and reliability, now what we need to do…Is add the flexibility shippers require,” said Krusel.

“That flexibility is to allow shippers to not only move containers through Prince Rupert quickly and efficiently, but to have the ability to do something with the container,” he added, alluding to de-stuffing and re-stuffing of containers, distribution capabilities and empty container storage so exporters can send things to Prince Rupert to be packed and shipped to Asia.

Noting that it will take a lot of work and buy-in from a variety of stakeholders, the economic impact study showed that achieving that vision would result in 9,100 FTE jobs accounting for $610 million in wages and a $2.1 billion economic impact.

“We have a realistic vision of where this port can go in the next 10 to 15 years…All we are laying out is that if we are collectively successful in achieving this vision there are some exciting times ahead for the community and the whole region.”

The full economic impact analysis is available at www.rupertport.com
Posted by . at 11:31 pm