A few rooms with a view and the City will cut your front lawn! 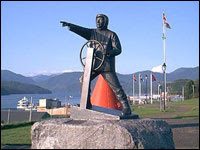 Lost in the shuffle over the shifting burden of taxation in Podunk and five year financial plans was the re-zoning of some commercial space at Mariners Park to provide for  the construction of a private residence atop the building that currently hosts the Movie Gallery and the now closed Peglegs Restaurant.

Looking at the results of the Daily News score sheet for Monday's council meeting, the city's councillors and Mayor were quick and unanimous in offering their approval to allow Bob Payne to continue forward with his plans to construct a second story residence that will have perhaps one of Prince Rupert's greatest front yards and fabulous vistas.

Included on that list of councillors in the affirmative in the Daily News vote record from page three of Wednesday's paper, was the name of Councillor Sheila Gordon Payne,  which struck us as interesting and a tad confusing,   considering the family ties and such to the property in question. However, as we understand it from other sources at council that night, the Councillor as would be expected of the electorate, excused herself from the vote, eliminating any potential claims of conflict. Though she may wish to ask the Daily News to clarify their record keeping of the vote for the sake of history. Regardless, we will know for sure of the status on her vote on the issue, when the official minutes of the meeting are posted/printed by the City Administrator in the next few weeks.

As for the project itself, the details of the expansion, listed as the McBride Point Residence are available on the city's website as part of the Agenda for the Monday April 12th council session.

Zeno Krekic of the City's planning department offers up his assessment of the project and suitability for it in the Mariner's Park location. The full package begins on page 23 and continues on to page 43 of the agenda offerings.

What's intriguing about the whole process is that all voting councillors and the Mayor offered quick approval without seemingly any apparent concern or discussion as to whether they wish to have what amounts to private housing on the cusp of a public park, or if the design of the project fits in with what they are seeking for in the Mariner's Park area.

An interesting turn of events considering the rather heated discussions of 2008 when the Pacific Coast School attempted to locate a few short steps away in the same region, and was eventually rejected over concerns about the suitability of an educational institution in the industrial area, that despite of course the presence of the  educational classrooms of the Hecate Strait Business Society in the same region.

That debate provided for some very vocal  exchanges and much discussion in the community over council's handling of that particular land issue and the various development options that buildings in the Cow Bay area should be allocated for.

Yet, there was none of the same banter about this change to the dynamic of the region, one which provides a rather spectacular setting for a private residence and perhaps could now open the door for further residential development along the park front property.

And in fairness, one wonders if the city can refuse if other developers of commercial properties in the area (ie: the Forestry buildings across First Avenue East or the possibly soon to be sold Regional District building) current and future owners may too wish to have Mariner's Park and the eventually to be completed Spirit Square as the focus of their front window vista as well.

It's an interesting change of direction for the City to head towards this dedication towards residential development in Cow Bay area, though one wonders if they will remain consistent if other requests for re-development of other properties in the area come about.

For the project in question however, its a rather intriguing concept, one which judging by the amount of windows in the design will surely take advantage of what should be one of Prince Rupert's most picturesque views and provide for some aesthetically pleasing and civic maintained landscaping to boot!