A few gaps to fill for Northwest BC's Premier Mall 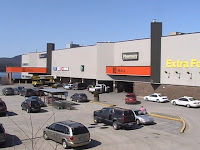 Regular visitors to the Rupert Square Shopping Mall may be wondering if there has been a giant sale on plain brown paper of late, such is the state of window dressing for many of the retail spaces in the city's down town shopping mall, as Prince Rupert's still stagnating economy continues to cause troubles for the retail sector in the city.

In recent months the mall has seen the departure of a number of retail options, from Digital Printing, Carlton Cards and most recently the mall location of the Dollar Store with More, still to be determined from the ever popular Prince  Rumour Mill is the fate of the main anchor on the lower level of Extra Foods, with any number of possibilities still apparently in play from a re-branding of the grocery store, to its possible closure.

By far the largest of space holders at the moment is the Hudson's Bay Company which through it's Zellers brand has two locations a main store and a discount section on the lower level, in addition to the chain's Fields franchise which is also on the lower level.

The mall which was locally owned for thirty three years was sold two years ago to the Pollyco group, which at the time had some major plans in the works for the mall and a offered up a hopeful tone for local residents wishing to spend some of their money in town at local retail options.

However, a look over of the roster of stores from the shopping Centre's website provides a sample as to how the economy has impacted on those optimistic days of two years ago when we met the new owners. With the exception of an expansion for the Rupert Deli and the introduction of a transplanted store from Cow Bay in the Salty Crab, there have been more subtractions than additions of late as far as shopping options go for local residents.

Like many of the empty store fronts on Third and Second Avenues, the empty spaces on both levels are providing some clear indication that our economic times are taking their toll on the retail sector.

It's a double edged sword for retailers and would be retailers in the city, with Terrace seemingly our weekend shopping Mecca during the spring, summer and fall months, the incentive to locate here probably is not as great as it could be. Likewise for locals while they constantly demand more shopping options in the city, they vote with their cars every Friday to Sunday.

There's probably not much the mall owners can do at the moment but ride out the storm,  investors are no doubt cautious when it comes to taking out leases when the local economy is suffering and the population stagnant or dropping, but if things don't pick up as far as Prince Rupert's economy is concerned, the departures both in the Mall and along the down town core could very well out number the arrivals for a while yet.