For the Great One, maybe it's a case of "once bitten, twice shy" 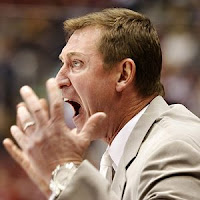 The long weekend was one of much speculation as to whether or not Wayne Gretzky had signed on with a plan to purchase the Dallas Stars, the latest of financial trouble spots in Gary Bettman's NHL discount bin of franchises.

Word of the rumoured bid came about from Dallas with an article in the Dallas Observer, which had it that Grezkty apparently set to team up with Brett Hull and Mike Modano, as "serious bidders" in the chase for the Stars.

A team that has been shopped around by current owner Tom Hicks, currently in the midst of some financial troubles of his own has been investigating the possibility of selling the Stars a team which is apparently there for the taking and the right amount of zeroes at the end of a number.

The rumour of the Gretzky angle was quickly debunked by a number of sources including Modano who called it a bad fairy tale, though Modano himself is not averse to joining in with local investors in some capacity should he call it a career at the end of this season.

Darren Blake who is Gretzky's agent also poured cold water on the prospect of a Gretzky cash flow coming to Dallas, though Blake advises that Gretzky always is receiving potential offers for investment from many directions. Gretzky who has been left on the sidelines in the most recent discussions over the fate of the Phoenix Coyotes, is still waiting to be paid out for his past efforts in regard to that troubled franchise currently the ward of the NHL.

It's doubtful that he would have any plans to invest any more of his money in the NHL until Gary Bettman makes things right regarding his past experiences with NHL ownership and management, something we like to refer to as the Once Bitten, twice shy apporach to negotiations. However the current distance in rather cool relations between the two sides is leaving a rather large gap for the NHL when it comes to making use of one its most treasured assets, that being the reputation of the Great One and his legacy in the game.

At the moment he seems less than inclined to partake in much in the way of public events when it comes to the NHL, not even in the role of a greeter, let alone sink any more of his family funds into Mr. Bettman's casino.

One possible delightfully ironic bit of drama to come could be if the Coyotes are sold to Winnipeg interests and return to whence they came from, some of that potential purchase price out of Winnipeg could end up being used to provide Gretzky with that which he believes he is still entitled to.

Making for a situation where the city which he once tormented as a player, will in the end prove to provide him with his financial reward in his post playing days era, you just can't write a script better than that!

But that scenario seems less likely with each passing day as the seemingly never ending process of sorting out the Coyotes lumbers on in Arizona, all while Gretzky patiently waits to see if he's to be done right by.

Until then, we suspect he's keeping his wallet pretty close at hand and far away from those of his once fellow owners of the NHL.

This item first appeared on the HockeyNation blog
Posted by . at 1:40 pm