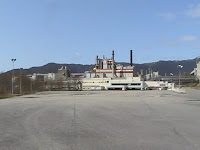 If it's Thursday do we take the cash from the fountain outside city hall?

There seems to be a wee bit of confusion over where the city is paying the maintenance and assorted costs regarding the Watson Island mill site from  these days, at least if you are left to divining the city's financials from the pages of the city's two competing newspapers.

Last week the Northern View (read full article here) offered up their interpretation of the financial moves at City Hall when it comes to Watson Island with the City's reprenstatives in Financial Officer Dan Rodin  and Councillor Sheila Gordon Payne explaining as thus “Operationally Watson Island isn’t affecting us that much. We’re not using taxes or fees to pay for that property because the money is coming from reserves,” he said, noting that the City has been “very careful not so spend money from the anticipated taxes” from the mill. “This budget is not tight because of Watson Island, the money from that is coming from reserves. We’re spending as though that is not an impact on the budget…The bind we’re in now is not because of the costs associated with Watson Island,” added councillor Sheila Gordon-Payne."

So it was a little surprising to learn in the Daily News on Wednesday (read full article here) that no, the money for Watson Island isn't apparently coming from reserves but from a slight surplus which the city achieved last year.

Chief Financial Officer Dan Rodin said the money to cover the costs at Watson Island is coming from the City’s surplus, not its reserves. “Last year the City managed to get in the black. Our financial statements aren’t quite finished, but they will be presented to council in three or four-weeks time. There is a small surplus there that we are drawing down to pay for the pulp mill expenditures,” Rodin explained.


Putting aside the idea that the surprise surplus is it seems a tad illusionary, considering the constant increase in taxes that the city seems to devote to its tax paying citizens (if they had a surplus would taxes have to go up?), the merry go round of financing the Watson Island holding pattern is getting a little confusing.

We're not sure if one of the trusted news organizations in the city got its wires crossed, if the city has inadvertently provided incorrect information to one or the other or if it's some new accounting practice where every day you take your daily requirements from a new location, but it's a little confusing as to where the Watson Island maintenance costs are drawing their funds from.

One thing is certain, whether it's from a surplus, a reserve or from pennies dropped on the floor at City Hall, eventually we imagine the money comes from one source, the folks paying the taxes in Prince Rupert.
Posted by . at 9:22 am