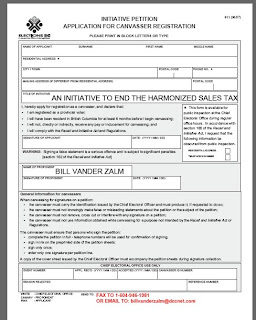 Now that the fuzzy glow of the Olympics has faded from view, it's time to get back to that other favourite past time of British Columbians, the blood sport of political debate.

And Like Nelson at Trafalgar, Bill Vander Zalm is ready for battle.

The one time Social Credit Premier who left office to less than glowing reviews, renews his political life in full force tonight as he leads the anti-HST forces into the fray with a public launch of his bid for a referndum on the provincial Liberal Government's plans to Harmonize taxation in BC with the Federal grab.

Commander Vander Zalm takes to Gordon Campbell's own backyard for his launch of the petition process which will require 10% of BC registered voters in each riding to sign the petition (in person) within 90 days of today, in order to move forward on the referendum process.

While the umbrella group that is against the HST is large, (respected Journalist Bill Tielman was one of the early organizers against the plan and offered up this review of the problems he sees in the tax.) It's Vander Zalm however, who seems to have become to public face of the protest movement, a situation that possibly leaves his fellow protestors just a little nervous, especially considering his past record in BC politics and the animosity that at one time the mention of his name would bring.

Vander Zalm of late has been criss crossing across the province on the rubber chicken luncheon circuit selling the merits of his desire to stop the Liberal's short. As can be seen in this effort from Terrace of a month ago.

Locally the debate on the issues has been engaged recently on the forum board of hackingthemainframe, where proponents of the anti HST fight have offered up their side of the story.

And while we understand the desire to stop the ever increasing grab of cash, we wonder how much support this bid will have overall when the end  of the process has arrived.

British Columbian's have long expressed a desire for quality health care, better school funding, improvement on social program delivery and on and on goes the wish list, all of which requires funding to remain constant, let alone expand.The Harmonization plan seems to have been put in forward in kind of a desperate measure by the BC Liberal's to try and inject more cash into the provinces government financials, in effect suggesting that without the added revenue many of our long held beliefs may require a second look.

Many might remind the Premier and his government that these are problems of their own making.The fact that the Liberals have little credibility of late certainly doesn't help their cause of defence, owing to any number of decisions which have given British Columbians cause to wonder what direction the province is heading.

Many of course would prefer that the government readdress its priorities when it comes to divvying up the cash that they already collect, something that this government has for the most part shown no inclination to try and address.

But still, during this ninety day run up to the deadline, we wonder how receptive to the protest the general public will be if the basic concept outlined by the Liberals is that without the revenue, the province faces major decisions on the key aspects of service delivery.

It clearly is a tax grab, but without it at this time, one wonders what the next step will be by the Campbell government and whether our current state of finances and expectations can be met without the added revenue.

However for those who have trouble with the prospect of a harmonized tax the game is on , and as the old proverb goes, the enemy of my enemy is my friend.

Tonight at least, all in the protest movement are united against the Liberal's plans, what remains to be seen is whether that momentum carries forward over the next 90 days, and more importantly if the population, or at least 10 percent of it, feel the same as those that have taken to the song books.

Mr. Vander Zalm first outlined his quest to lead the opposition to the proposed tax back in September..
.

.
The Premier offered up his defence in August

So here we are, the Battle begins today, the canvassers preparing to fan out and take their message to the people.

Knocking on doors, posting on Facebook and Twitter and spreading the word through their website fighthst.com (which occassionally doesn't seem to want to co-operate with knowledge seekers).

It promises to be three months of some pretty fine political theatre, though we wonder if when all is said and done, it will have proven to be much of a fight when July comes around.

Labels: The Battle against the HST