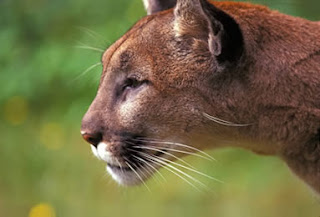 "You may see a cougar, but it’s generally not interested in you. The advice would be to face it, not turn your back and run, but make noise, let it know you are a human, and then back away  facing it... Have your children beside you. You don’t want to turn and run, but be aggressive. We’ve heard stories where people are telling children to play dead if they see a cougar. That’s not right. Never with a cougar. " -- Some helpful advice from one  of two Terrace based conservation officers working in Prince Rupert over the weekend.

The search for the rather sneaky cougar wandering the  city's neighbourhoods of late continued over the weekend, as the Big game hunters were called in  with the arrival of two Terrace conservation officers.

They made the trip to Prince Rupert based on the growing number of cougar sightings that have been made in the city over the last few weeks and a rising level of anxiety among local residents.

The two spent Sunday and Monday searching some of the areas reported of late as to where the cougar has been spotted, but no sense of relief for the concerned parents and pet owners of the area was provided, as the cat was not found during their expedition.

Most of the sightings of the cat have happened either at dusk or at dawn, but on occassion a sighting has provided cause for local schools to issue warnings to their students over precautions to be taken upon leaving the school grounds for the day.

Before they returned to Terrace they offered up some advice for Rupertites regarding the current worry about the cougar, among their concerns the unsupervised nature that some residents have when it comes to their small pets in their yards and accumulations of garbage that they noticed upon their search.

Also, they reminded Rupertites that their fondness for feeding the deer from their front doors or back decks is also a contributing factor to attracting those other members of the wilderness to the edge of the property lines.

The Daily news provided a full report on their stake out in the city in the Tuesday edition.

Delivering the message on cougars around town
By Monica Lamb-Yorski
The Daily News
Tuesday, April 20, 2010

Two of the Northern Region’s conservation officers were in Prince Rupert Sunday and Monday .

The men were following up on cougar sightings in Prince Rupert that have been reported over the last month.

“We’re hoping to come back in the near future to do some school programs,” said Gareth Scrivner. “People shouldn’t panic and be alarmed, but they need to know what to do if they do see a cougar.”

There are cougars in several towns around the province, Scrivner added.

“I’ve worked on Vancouver Island where there are cougars and there have been very few incidents. You may see a cougar, but it’s generally not interested in you. The advice would be to face it, not turn your back and run, but make noise, let it know you are a human, and then back away  facing it.”

Scrivner’s colleague, Colin Kravontka, said it helps to make yourself look bigger. “If you are out hiking, carry a walking stick. Have your pets on a leash. Have your children beside you. You don’t want to turn and run, but be aggressive. We’ve heard stories where people are telling children to play dead if they see a cougar. That’s not right. Never with a cougar.”

People need to be vigilant, he added, especially with small children. “Children have that high pitched voice quality that might attract a cougar. They might be playing outside around their house, screaming and yelling. Parents have to keep an eye on them.”

To date there have been sightings reported in the area near Hays Cove Avenue, on Borden Street, and most recently on Omineca and Summit Avenues, around the park area and near Roosevelt School.

Interestingly, there have been no cougar sightings reported in Terrace yet this year.

While in Prince Rupert, Scrivner and Kravontka, patrolled all the areas where sightings had been reported, but didn’t see any evidence of a cougar.

“We have received a number of calls and some of them are credible,” confirmed Scrivner, although one person reported a black cougar. “People should look in books or on the internet at photographs of cougars, so they know what they are looking for.”

Most sightings of cougars occur at dusk and dawn, the two reminded the public. When it comes to trying to catch a cougar, one of the things that will help is the use of cougar hounds.

“That makes it easier than trying to catch something like wolves,” explained Kravontka. “We can call in cougar hounds and they can tree a cat.”

Kravontka and Scrivner are convinced there’s only one cougar in Prince Rupert.

“Last year we had two in the Terrace area. Their territories don’t usually overlap. Young ones might stay together for a bit, but then they’ll split up,” added Kravontka.

During their two days in the City, the conservation officers noticed that there are several attractants in many neighbourhoods for cougars, bears and wolves.

People are leaving their little dogs tied up the front yard, there are dumpsters open behind buildings, and garbage in the front yard. “If people are feeding deer they need to be cognizant that if they are bringing deer into their yards, that may be drawing bears and cougars in to have a look,” Scrivner commented.