There was gold in that thar hill 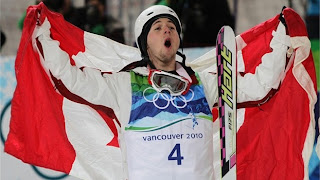 Canada's long running period of Olympic angst has come to an end.

As Alexandre Bilodeau provided deliverance from our ghosts with his Gold Medal Performance on Sunday night, with that remarkable run, Canadians can finally lay to rest the heavy burden of hosting an Olympics without a gold medal to show off.

Bilodeau's success on the mogul run of Cypress was a breathtaking affair, highlighting the speed, technical and acrobatic nature of the sport, with success or failure confined to 23 or so seconds. Watching athlete after athlete hurl themselves down the course, one could almost sense the rush that only a few of the athletes at these games must ever know.
It was a most fascinating display that was put on in prime time across North America, at one point it seemed as though Canada was poised to control the platform, holding first and second place in early sessions of the final round, though as the favourites rose to the challenge, our team slipped slowly to fourth and fifth overall .
The main stage thought belonged to Bilodeau as he battled one time Canadian team member who grew up not far from Cypress and current Australian mystery man, Dale Begg-Smith for the long sought golden talisman.
The Australian had run before Bilodeau, setting the marker for success on the night, a bar passed with speed and style by the Quebecer who had the run of his life on his way to Olympic glory. With his tentative hold on first place with one participant to go, he settled back into those big comfy chairs at the bottom of the hill to watch France's Guilbaut Colas, make his final run, a speed enhanced burst down the course that thrilled, but alas failed to reach the technical and acrobatic nature of Bidlodeau's run.
With an the packed Cypress Bowl crowd holding their breath along with Canadians across the country, all awaited the judges final verdict, a sixth place finish for Colas and gold for Bilodeau and relief for Canada.
The judges decision wasn't universally hailed, Australian officials accused the judging panel of inflating the Canadian's figures at the expense of their star, though to his credit, Begg-Smith was putting some distance between himself and his Aussie handlers with a gracious display after the race.
The Bilodeau story in addition to a sports event has an amazing back story as well, a close knit Montreal family, Alexandre's inspiration he said comes from his brother Frederic who lives with Cerebral Palsy, a testimony to dedication that clearly rubbed off on his little brother. It's the kind of story that television loves and featured well, but one that seems in this instance to be honest and true.
In the stands on Sunday was Frederic celebrating the success of his brother, still the number one fan, but now joined by a few million others who have found their first Olympic hero of the games.
The long period of unfulfilled wishes and dreams came to an end on Sunday, the promise of more success to come fresh in the air now. A confidence that seemed infectious in Whistler and Vancouver on Sunday evening.
Sunday provided two medals for the day, Bilodeau's gold and a bronze for Kristina Groves, combined with Jennifer Heil's Silver from Saturday, Canada has moved into the upper tier of the medal count after two days. With today's success, Canada's three medals thus far keeps them within reach of the front running Americans who have six and Germany who have four.
Momentum is always the key to sports, Sunday Canada's Olympic team received its shot of it, Monday night what we suspect will be a jammed BC Place will hear its first rendition of O Canada.
With the monkey off their back now, you get the feeling that the song may very well be bouncing around the stadium a few more times before all is said and done with these Olympics.
Globe and Mail-- Bilodeau wins Canada's first gold on home soil