Fraser Institute rankings stir the debate for another year! 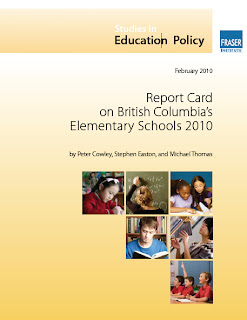 If the province wishes to make their public schools reach those levels that grace the top twenty of the list, then invest the required capital both in education and social programs to ensure the playing field is a more level one.

Until the province accepts that it has dropped the ball on education and develops a comprehensive plan to make sure that the public schools have all the tools required to the job, the only thing that these studies from the Fraser Institute seem to succeed in doing is highlight the disadvantage that the Government of British Columbia is putting the education of a good portion of its children in.
The full Fraser Institute study can be accessed from their website found here.
Thursday's Daily News provided an article on a study from a different perspective than that of the Fraser Institute, with a study from the Human Early Learning Partnership which examined the effects of neighbourhood poverty at early childhood and early adolescence and the impact that it had on Grade 7 testing. Well worth a read for a bit of balance from the avalanche no numbers crunched in the Fraser Institute report.
On Friday, we posted an item about the release of those early numbers to Black Press ( found locally in the Northern View), part of that post provided a well thought out editorial from Chuck Bennett as published in one of those Black Press papers, the Golden Star.
After you digest all the numbers and read the various rationales behind the Fraser Institutes compilation for 2010, it is worth reading Mr. Bennett's editorial. He provides a reasoned and well thought out examination of these Reports and puts into perspective the impact that they have on schools, teachers and students.
We'll leave his examination of this years efforts from the Fraser Institute as the final word.
Posted by . at 12:41 am