Big dreams of the Big House in Terrace 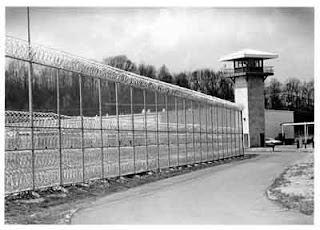 Terrace city council is putting out the welcome mat for felons, well felons that will be behind bars that is.
As part of a bid to bring some diversification to their local economy, Terrace's Mayor Dave Pernarowski has outlined the pitch he has made to the provincial government in order to gain their support for his quest to have a federal prison placed in that community.

They have already outlined where it might be located, lands adjacent to the city's airport, which would hold some 400 inmates and cost $170 million. The spin off benefits for Terrace would be well paying full time jobs and support industry contracts and many purchases made locally that would be required in the day to day operation of a federal correction facility locally.
While the projected bidding for a facility is still in its early development phase, it seemingly may be hampered by the fact that at the moment, the Federal Government suggests that they have no plans to build more prisons in the short term.
Still for the Terrace Mayor and council, laying the groundwork is something that they feel needs to be done now, just in case the Federal government changes its mind owing to a sudden surge of misbehaving citizens.
Should they find the need for more housing for the nation's convicted criminals, Terrace stands ready to stand guard.
Terrace Standard-- City pushes federal jail
CBC British Columbia, Daybreak North-- Terrace is prison ville (interview with Mayor Pernarowski)
Terrace Daily online-- Jail in Terrace? Where did this come from? Smokin' Pot?
Posted by . at 12:21 am