Familiar themes in Liberal's speech from the throne 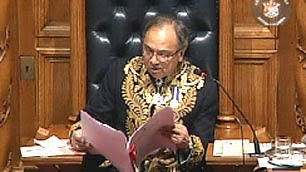 We'll credit Vaughn Palmer of the Vancouver Sun with the definitive one liner on the Speech from the throne delivered by Lt. Governor Stephen Point on Tuesday.
Said Mr. Palmer, who was spot on the target with his analysis of the speech for the Sun , "Gordon Campbell might not be the greenest premier in Canada. But he must have the lead in recycling."

And really, in a line that pretty well defines the blue print as delivered by the Lt. Governor on behalf of the Premier and his government.
The Liberals gave all the appearances of going through the motions of governance on Tuesday, aware that few are paying any attention to their machinations of late, while the Olympic experience grabs the headlines.
The Lt. Governor tried his best to make the speech something of interest, including a little cheer leading for Canada's efforts at the upcoming Olympics and a well delivered aside to the bureaucratic nature of the government narrative that these documents seem to provide.
Those two diversions from the dry recitation of would be government plans, were among his most entertaining moments. However, when it came to the actual body of the speech, as any good actor knows, you are limited by what the writers give you to work with.
The Speech from the Throne, rather than a bold declaration of the province's future, instead appears to have been a rehash of previous initiatives, combined with a few intriguing trial balloons for education and health and energy, that offered little detail as to how those pivotal ministries may look once the budget is delivered in March.
There were hints as to a rethinking of the delivery of services and funding in the health and education sectors, items of interest that will no doubt resonate across the province as local school boards and health authorities await further details on what their future may look like and what their budgetary abilities will consist of.
Reform of BC Ferries which should be of interest to North coast residents and the winding down of BC Rail were also briefly touched on during the afternoon address.
The growing shift towards accessing private energy sources also was given a nudge in the speech as the the promise of an introduction of a Clean Energy Act, which would move forward prospect of BC Hydro procuring its power requirements from private producers.
Bill Vander Zalm will be pleased to know that the Government is still on its path towards the HST, providing us all with the ongoing theatre of Mr. Vander Zalms return to a public personna as he takes on the lead of the No Tax brigades, no doubt much to the chagrin of the opposition NDP.
In what may be an olive branch to tax burdened homeowners, the Government has offered up some kind of tax relief for homeowners with children, who will be able to defer their property taxes until they sell their homes or they die. Though they were quick to add that local government's won't be impacted by this, which is no doubt a relief to cash strapped municipalities, though it's not clear how all of that would work and no doubt it will be fleshed out for us in the upcoming budget.
Some familiar themes of the past were given another moment in the Legislature lights, as the speech touched on such past initiatives as Neighbourhood learning centres and affordable housing.
The Premier also seems to have recaptured his interest in the environment again, as his past plans for a Climate Action Plan, Climate Registry and Western Climate Initiative also found some space in the speech of Tuesday.
To that dedication to the environment the Speech offered up one nod to protecting our natural resources and watersheds, as the Government vowed to partner with American officials in the protection of the Flathead Valley of southeastern British Columbia, with the offering that Mining, oil and gas development and coal bed gas extraction will not be permitted in the Flathead Valley."
For the most part however, the speech provided little of a substantial blue print for the path ahead, and to be honest, these speeches are always long on rhetoric and by the end of a mandate rarely seem to resemble the achievements of the government of the day.
The real action is in the budget deliberations, a process that comes to a conclusion in March when the Liberals will deliver their financial blue print to the province.
That's when they show us the money, or as the case may be don't show us the money. Much of the plans and idealistic ambitions of the Speech from the Throne will change under the very real process of counting the cash and allocating it to where it should best be used.
In the end, and with all respect due to the Lt. Governor, its Mr. Hansen's speech in early March that will provide the real blue print for the Liberal agenda and with it how local communities will evolve in the wake of those financial allocations.
For those who like nothing better than to curl up in a favourite chair and read a political blue print or two, here's the official transcript of upcoming Liberal agenda.
For the rest of us, before we head to the television sets to take up with the Lt. Governor over on the sidelines to cheer the nation on to victory at the Olympics, we'll take a look at some of the reviews of his efforts on Tuesday afternoon.
Vancouver Sun-- Recycled ideas in throne speech boost premier's green cred
Vancouver Sun-- Throne speech hints at more reform for education, BC Ferries and affordable housing
Vancouver Sun-- Throne Speech education news so far
Vancouver Sun-- Good intentions but little detail in B.C. throne speech
The Province-- Even a Taser couldn't have jolted His Honour
Globe and Mail-- B.C. Throne Speech puts focus on environment, fiscal discipline
The Tyee-- Libs to Cut Services and Red Tape
Victoria Times Colonist-- Families are a priority in throne speech
Georgia Straight-- B.C. Liberal throne speech opens new session of legislature
CBC News-- Olympic spirit will launch B.C. reforms: throne speech
Posted by . at 8:13 pm