Sun Wave and the City head back to court!! 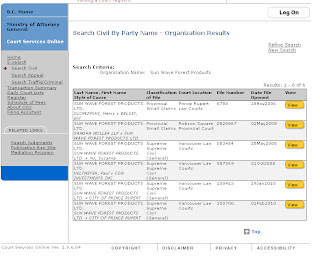 The latest twist in the Watson Island show seems to be that of adding the prospect of a trip back to the court room for the City of Prince Rupert.
This as SunWave Forest Products filed a civil claim in the Supreme Court of British Columbia in Vancouver on Monday, with the City of Prince Rupert listed as the other participant in the legal proceedings.
The discovery of the Sun Wave move (through a search of court listings on the Internet of all places) comes as the Prince Rupert council met in closed session last night, in the latest of closed to the public discussion sessions over the progress of the sale of the Watson Island industrial lands.
It's of interest to note that this is not the first time this year that Sun Wave has filed a claim in court, with a previous one filed against the City of Prince Rupert on January 19th, of which the city's residents have heard nothing of from their elected leaders. It was the first time that Sun Wave took an issue to the legal process since 2008, so one would imagine that the current moves in place to sell the site has provided the motivation for Sun Wave to seek legal opinions.
With a new month and apparently a new court filing, we are left to wonder just what kind of impact these court proceedings have had so far on any potential sale of the site, leaving Prince Rupert to continue paying those maintenance fees (last estimated at close to 100,000 per month) on into the foreseeable future and now adding the bonus feature of billable legal hours to come .
Beyond the growing expense of ownership of the site for now, the biggest concern for taxpayers and residents alike is the lack of information coming forward from our elected officials and the city's upper management.
A cone of silence seems to have descended on city hall in this matter, with the city citing matters of confidentiality and negotiating requirements and now we imagine legal concerns to be added to the quest for silence on the issue.
First it was the refusal to confirm the identity of many of the potential investors or what they had to offer and now its the surprising news that the former owner still is seeking a day in court, for what we don't know. Add on the numerous closed door sessions in the last few months on this issue and it's no wonder the locals are beginning to get a little concerned about where things stand.
Surely the time has come for the city to provide a bit of clarity for its residents as to where we are at the moment and what the future holds both in regard to the proposals received and now the new legal intercessions. Clearly it's time for a little of that much discussed transparency on this issue and the opportunity is at hand for the Mayor and his council to provide a long overdue update on the file.
A good start might be to spring for the six dollars that the court registry asks for to learn more details on the recent claim in court by Sun Wave. It would be helpful to post all of this information regarding the Sun Wave process on the City's website, making it a useful information conduit for the folks that have the biggest investment in all of this.
When the bidding process came to a close in December, it was thought that the Watson Island situation was going to be handled as expeditiously as possible, now into February it continues to meander along a path that seems more of a boondoggle than anything else.
Honestly, the city's residents shouldn't be finding out about surprise developments like court filings and such by making internet searches, we deserve a bit more for our tax dollars than some version of the city knows best, or a pat on the head and the suggestion that all will turn out fine.
The ongoing silence by the Mayor and council is doing little to inspire confidence in their abilities to bring this process to a successful conclusion, a little conversation and some factual information might go a long way to reassuring us that things haven't gone completely off the rails and that our dwindling tax dollars are being protected.
.
Update: 10 pm February 3, some interesting documentation has been provided for Podunkians to ponder over on hackingthemainframe, a civic minded Podunkian has ponied up some spending money to access the various legal filings on the Watson Island file.
It all makes for some fine bedtime reading and material that should serve as grist for the discussion sessions for the next little while at better coffee shops and beverage lounges around town. Who knows we may even hear word of this little legal dust up in some of our other media outlets around the city! Though they're clearly a little behind the news curve of more than a few folks in town.
Posted by . at 9:29 am