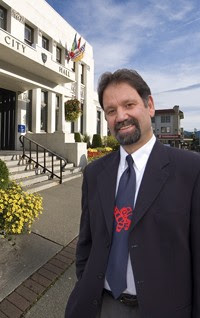 A fascinating session of point - counter point played out on the pages of the Northern View today, as Prince Rupert Mayor Jack Mussallem took offence to the theme of an editorial from the Northern View's Shaun Thomas.
At issue the tone and content of Mr. Thomas's thoughts on the recent All Native Basketball Tournament and a very public absence of the city's Mayor at those events.
The tempest has its genesis in the following My View piece from Editor Shaun Thomas, published last Wednesday in the Northern View.

This weekend was, for yours truly, pretty awesome. After a fun night out with friends getting the disco experience with an ABBA tribute band at Chances' (an experience that was a lot of fun but made me a bit happier I missed the music of the 1970s), it was off to the start of the All Native Basketball Tournament on Sunday.

Between the layout of the paper and other commitments I only got to take in a little bit of action, but already the atmosphere in the Russell Gamble Gymnasium is something to be experienced. The crowd was already loud and cheering during some of the first games of the tournament - definitely a good sign for the week to come and the finals on Saturday.

But one definite highlight from the weekend was the opening ceremonies and the outstanding job done by the Heiltsuk Nation in drumming and dancing at the event. At one point I found myself cornered just behind the drummers and could actually feel the drums as they beat and filled the room with sound. The Chiefs entered and the players, many of them dancing themselves, followed. And after a welcome to the traditional territory of the Tsimshian, the emcee called upon the Mayor of Prince Rupert to welcome everyone.

And as people turned their heads to look for him, an , awkward silence filled the gym. Personally I was waiting for crickets to start chirping or a stray tumbleweed to make its way across the floor like in the old western comedies.

The emcee quickly moved on and Gary Coons did his best improve to brush the no-show off. But, if I can paraphrase a catchphrase from a TV sitcom that ended well before I was born: Mayor Mussallem, you got some 'splainin' to do!

I'm going to give him the benefit of the doubt. It may be that there was a personal situation that arose or That it didn"t make it to his calendar or that it slipped off the radar with everything else going on. And we all have off days.

But, since there was no welcome or representation from the City of Prince Rupert, I strongly suggest that a formal apology go out to, well, everyone. Start with tournament organizers and the Heiltsuk Nation and then move your way down the list of participating communities.
Given his vote against providing a grant to the tournament on Monday, the timing of the mayor's absence probably couldn't be worse. This is the first time in the five years I've covered the tournament that there was no City welcome and, given the thousands of people who come to town for the event, it is not something to be taken lightly.

It's also something that should never be repeated, as it gives Rupert a bit of a Black eye.

Shaun Thomas
That synopsis of the events of last weekend, which saw the 51st Annual All Native Basketball Tournament take over the pulse of the city seems to have left the Mayor with more than a few things to say, none of them in what could be called a measured tone.
Mayor Mussallem provided more than a few mercurial comments in response to the Thomas viewpoint, one which the Mayor described as irresponsible journalism. He followed up that observation with such descriptive action words as repugnant, offensive, callous and arrogant. Finishing off that flurry of shots with some fascinating imagery in which the Mayor explains he believes the opinion piece was full of innuendo and feces.
Then for good measure, a good old fashioned ass kickin' for Mr. Thomas is suggested as perhaps the best course of action from the city's top politician.
The full rebuttal from His Worship can be found on the Letters to the Editor pages of the Northern View.
Considering the personal nature of the rebuttal, it's not surprising that Mr. Thomas has offered up his follow up thoughts on the issue. The Mayor's letter was a very public rebuke, one that Mr. Thomas took time to dissect while providing one more review of the events of that day, as they played out on the floor of the Russell Gamble Gymnasium, points which were posted on the Northern View website today as well.
If there is a flaw in the original Opinion piece of a week ago, it was the absence of any comment from the Mayor as to the cause of his absence, it would have been instructive to have had that viewpoint in the original opinion piece or even the information that no comment was available .
Opinion pieces are designed to provoke thought and spur debate, the fact of the matter is that the Mayors absence was a valid discussion topic, one which clearly resonated around the Civic Centre and beyond.

All in all Rupertites must feel as though they have walked into the middle of a loud and nasty bar room discussion, one that has undertones of potentially more, the Mayor has provided a rather strange and vitriolic response to an article which while making a judgment as opinion pieces normally do, also provided the readers with a few rather important questions.
Was the Mayor invited to the event or was there indeed a "miscommunication" as suggested, regardless of that , did anyone from City Hall take the time to investigate the protocol of the ANBT opening ceremonies. As pointed out in the opinion piece, in the past it has been more or less the tradition that the Mayor or a suitable civic representative would make a few opening remarks at the event.
It baffles the mind to a degree in this era of the photogenic and PR savvy politician, that the Mayor wouldn't think of dropping in at the Civic Centre for the opening ceremonies, if for no other reason than to gain a few photos much like his collection of school visits in local papers of the last few weeks.
While he says he had no right to attend, it was an open event to City residents, all be it ticket buying residents, but considering the city's stake in the proceedings (a potential rebate on rent), we're pretty sure that the Mayor would have been able to find a place to sit at the Opening.
Clearly something went wrong leading into the opening ceremonies, Mr. Thomas is correct in his interpretation that having the Mayor's name called out for opening remarks and having no Mayor or suitable replacement there to make them is a tad embarrassing, regardless of the interpretation of events by Mayor Mussallem.
Somebody has dropped the ball on this one, since past precedent at the ANBT has seemingly always provided for a few words by the Mayor. Perhaps somebody at City Hall should have explored that topic with ANBT organizers, they after all seem to have been rather easy to contact, especially considering their recent appearance at City Hall.

Finally, considering the tone of the Mayor's reply and it's attack on Mr. Thomas' legitimacy as a resident of the city and as a reporter, you have to ask yourself if that is conduct becoming of a public figure.
While we understand the need to correct a record if one indeed is incorrect, or to provide some feedback on an issue, the Mayor's almost third party like diatribe in this case, was not one that you could say offered up a measured response.
There is a more reasoned way to get one's point across other than throwing around the word feces and offering up the prospect of physical violence. Beyond the disjointed and rambling nature of his reply, his point could have been made with much less anger and with more of an explanation.
That is what we should expect from someone who is expected to represent us not only in Prince Rupert, but across the country, continent and even the around the world. He is the public face of the city and in this instance it isn't a particularly pleasant one we have seen.
The old school rule of thumb when it comes to sending out a message, whether by today's electronic methods or by the ways of ancient parchment has always been to think twice before you compose your words, read them over a few times before you send them off and most importantly to cool down before rushing off an emotional response.
Never has there been a more clearly defined example of that rule, than the Mayor's ill defined and now very public rant.
Posted by . at 9:56 pm