The Port wants Prince Rupert on that podium of potential 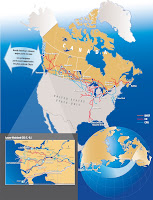 The Port of Prince Rupert is hoping to translate Vancouver's Olympic giddiness into some flag wavng for the North coast, at least that's the impression one gets from a contribution to the Northern View by Don Krusel of the Port Corporation.
Mr. Krusel, the President and CEO, offers up his blue print for Olympic success for Prince Rupert, which would have those locals that have left for, or are heading down to Vancouver for the Olympic games, take some time to talk up the Northern Gateway.
His review of the success of the port thus far recounts the large sums of money spent by government to get the Fairview container port up and running, tallies up the jobs created by that project and reviews how so far, the port has weathered the ravages of the global economy. In addition he passes on his thoughts on how others see the Port's success thus far, which he says is a very positive view of the ports development so far.
Playing up on the theme of team work, he looks to the community to spread the word of what the Port is all about and what it has to offer the world, you can pick up your talking points from the Northern View website.
Posted by . at 12:22 am