As the flame fades from view 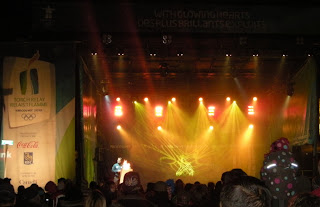 Prince Rupert's moment of flame has come and gone, a rather enjoyable Monday night for most in the downtown area, with remarkable weather providing for the festive atmosphere which featured on stage performances from both out of town and local performers, a fair amount of cheer leading and speechifying all leading up to the much anticipated arrival of the city's mystery torch bearer.
As the torch relay began it's trek from the civic centre and wound its way through the downtown streets, with scattered groups of people standing along the fringes of the main celebration to catch an early glimpse of the torch and its procession of vehicles ranging from corporate sponsors to RCMP and torch relay support vehicles.
As the relay made its final turn onto Third Avenue West heading towards city hall, the identity of the torch bearer soon became known as one of the city's most famous of volunteers, Charlotte Rowse made the final sprint up to the stage and the Olympic cauldron waiting to be lit.
And with that simple act of ignition, Prince Rupert as the emcee said had joined the Olympic celebrations (one wonders how many times that sentence has been said with "your town here" inserted into the speech during the course of this cross Canada journey.
With the flame burning brightly and Oh Canada filling the air the event continued on for another hour or so capped by a fairly impressive fireworks display over the harbour.
With the road show all packed up by late Monday evening and ready for the next stop of Bella Bella, all that is left is the memory of the evening, a chance to follow the relay onto Vancouver and its moment of celebration at the opening ceremonies.
For most of us on the North coast, Monday is about as close as we're going to get to the Olympic games, distance and cost make Vancouver about as close as Torino was last time, so a chance to take part in even a small thing like the torch relay probably meant a lot, giving Rupertites especially the younger citizens, a sense of the moments to come at mid month.
All in all, the night was pretty impressive, well organized and clearly enjoyed by most.
The sponsors gave away their thunder sticks, illuminated coke bottles and flags and the town had the chance to forget about some of the very real problems of the day for a few hours and sit back and enjoy a show, most importantly a hard working volunteer in the community received some much deserved recognition and a very special honour, no harm in all of that!
Still curious as we are, we found some interesting reviews of the three hour celebration in the city, ranging from a Vancouver Province interpretation of the tour arrival in town, the Northern View's review of the nights events and Daily News reporter George T. Baker branching out it seems into the radio world, with a report for a Vancouver radio station.
Check it all out below:
Vancouver Province-- Olympic torch crystallizes hope for hard-hit North
News 1130 Vancouver-- Olympic torch on the central coast Monday evening
The Northern View-- Olympic Torch Relay comes to Prince Rupert
Posted by . at 11:06 pm