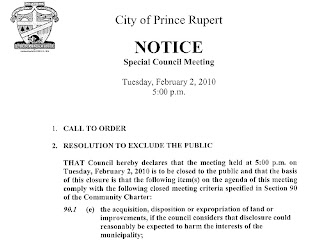 The latest installment of the long running series "Watson Island" runs tonight, a 5 pm performance taking place by invitation only at Prince Rupert city hall.
Council will sit down at 5 pm tonight in yet another of their now seemingly regular closed to the public sessions to discuss matters that apparently will involve the process of selling the Watson Island industrial area.
Monday's Daily News outlined that the topic of the day will indeed be the former New Skeena/China Paper site, with two un-named Councillors confirming the agenda of the day for the local daily.
This latest meeting of council comes almost six weeks after the final bids were received by the city, with a number of would be buyers eliminated from the short list by an internal city committee. A situation that has raised the collective eyebrow of many of the town's residents, who are rather interested in why the city won't examine all of the bids in session, closed or open.
Perhaps, as those doors close to the public once again at 5 tonight, we should misplace the key until they reach a decision (feel free to send plumes of white smoke out of the City Hall chimney when you're ready to go home) all in a bid finally come to some kind of closure on this seemingly never ending and drawn out process.
What will be interesting, once council finally decides on a successful bid, will be if we learn of the remaining bid participants and what they offered to the city as far as investment and jobs and return of investment to the city.
Posted by . at 1:54 pm