Slow and steady the path towards Port Phase II development 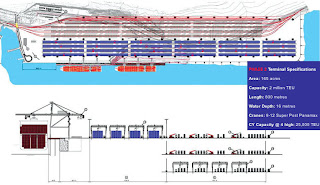 “I know the community is very anxious and maybe impatient about when that switch will happen, when the big announcement is coming. I don’t think we are going to see one big announcement, I think there are going to be a lot of announcements coming gradually…We’re at a level where, with what people know about Prince Rupert, there is going to be a series of progressive announcements improving our port.”-- Port of Prince Rupert President and CEO Don Krusel, outlining his view of the path towards Phase Two development of the Fairview Container Port

The Port of Prince Rupert still sees Phase II expansion on its horizon, though in a speech to the Prince Rupert Rotary Club last week, Port President and CEO Don Krusel seems to have lowered the anticipation of a sudden boom town situation when it comes to Port expansion.

On Thursday The Northern View provided a review of Mr. Krusel's speech to Rotary, outlining how in his view the prospect of Phase II development in this current economic climate could see Phase II take place in segments, a Phase A and Phase B approach to development of Prince Rupert's most anticipated industrial development.

The 650 million dollar price tag for the expansion appears to be the key issue for development and with the American economy still mired in recession like times and world trade at the moment slowing down because of the world economy, investment in such a large undertaking may be harder to achieve than in more prosperous times.

While he issued the cautionary tone on expectations, he did reinforce the idea that phase two development is needed, with the Port at capacity as we head into 2011, the port is at the point where expansion is needed, but it will slow and gradual expansion moving forward.

Welcome news no doubt for city residents, but it now appears that the timetable of anticipation will have to be revisited for those hoping for a sudden reversal in the region's fortunes tied in with Port development.

The Port CEO also touched on a few other issues of importance to Port development, he outlined that the current discussions with the Coast Tsimshian could bring an agreement in place by the end of the year.

The success of Phase One has also gained notice within the shipping industry's officials along the Pacific coast, where ports in the US now factor in Prince Rupert's success into their strategic planning.

You can read the full Northern View article from their website here.