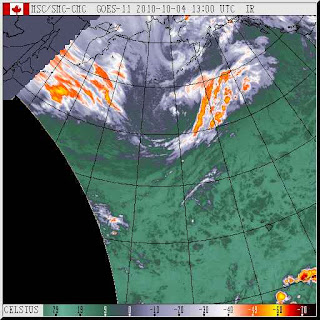 The first full week of October is going to start off with some rather familiar weather conditions for the North coast.

While Monday will shape up to be pretty enjoyable day, the wind will pick up later today and the weather patterns make a definite shift by midnight.

Wind and rainfall amounts of near 100 millimetres make up the main points of a Weather warning issued by Environment Canada for Monday night, Tuesday morning and into Wednesday, making for a wet start to the week before Thanksgiving.

A slow moving low pressure system in the Pacific is making its way eastward with winds from the southeast at 90 to 100 km expected to reach Haida Gwaiii near midnight tonight. The onshore flow will bring with it heavy rain with amounts of 100 millimetre in coastal areas, 50 millimetres further inland by Tuesday.

The link to the weather warning can be found here.

The full warning is repeated below.


This is a warning that significant rainfall is expected or occurring in these regions. Monitor weather conditions..Listen for updated statements. A deepening low pressure system over the pacific is slowly moving toward the north coast today.


An associated frontal system will bring heavy rain to the north coast beginning overnight tonight. Rainfall amounts near 100 millimetres can be expected over coastal sections and near 50 millimetres over inland sections by Tuesday evening.


Heavy rain is expected to persist into Wednesday before tapering off as the front moves further inland. As the low approaches the Charlottes strong southeast winds of 90 to 110 km/h are expected to develop near midnight tonight. These winds will persist into Tuesday morning before diminishing near noon Tuesday.
Posted by . at 6:25 am