Those crafty kids and their internet connections 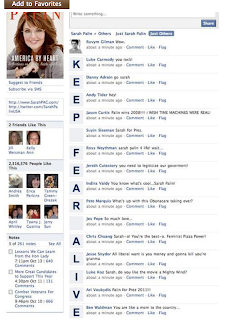 Sarah Palin won't be able to blame her "mainstream/lamestream media foes" for this one.

The one time Governor of Alaska, and Queen Bee of the Tea Party movement likes to make much noise about how she gets her message across without filter, but sometimes it seems a filter might be handy little thing to have.

But today the anarchists of the web struck back, as they took over her Facebook wall in what is clearly a coordinated effort to send their own personal message to her political troops.

Courtesy of the Pundit Kitchen is this screen shot of the deviously clever bit of internet theatre,  a message that has a certain resonance to those with sharp eyes and are frequent viewers of the Stephen Colbert show on Comedy Central in the US and the Comedy Network here in Canada.

The message was delivered to the Palin Facebook page on the eve of the combined Jon Stewart/Stephen Colbert rally on the National Mall in Washington set for tomorrow.

We're going to go out on a limb here, but we have a feeling that the creators of the Facebook mayhem are fans of Mr. Colbert.
Posted by . at 1:42 pm