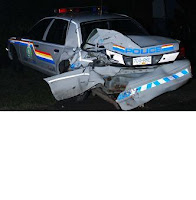 The early morning hours of Saturday proved to be a rather busy period of time for the Masset detachment of the RCMP.

Masset Mounties were handling a call to lend assistance on the file of a suicidal male shortly after 2 am Saturday, when the male in question became a  near casualty of a second un-related call while he was sitting in the police car.

The potentially fatal situation evolved after  the police had escorted the man on the assistance file to the back of their vehicle to discuss what led to his situation that night. While they were dealing with him, a call came across the police radio advising Masset members to be on the alert for an alleged drunk driver, who had been reported leaving a local drinking establishment.

The wait it turned out wouldn't be very long, within minutes the alleged drunk driver steered his vehicle into the back of the stationary police cruiser parked on the side of the road, resulting in extensive damage to the car (see photo above), as well as non life threatening injuries to the driver and a trip to the hospital.

He was examined by attending Ambulance and Fire responders and turned over to the care of his family.