Thanksgiving Chefs will have a watchful eye on the weather tonight 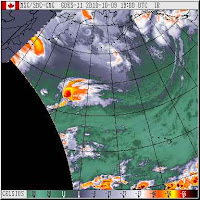 With many a Thanksgiving feast set for Sunday, Prince Rupert's home based chefs will be keeping their fingers crossed that the Environment Canada forecast for Saturday evening and Sunday morning won't bring power troubles to their kitchens.

Another weather system is making its presence felt on the North coast, with Environment Canada issuing a Wind Warning for the next twelve to eighteen hours.

A strong frontal system rapidly approaching the coast will produce strong southerly winds over several north coast locales tonight. These winds are expected to reach speeds of 80 to 100 km/h through northern regions overnight. Inland coastal regions will have slightly lower speeds of 70 km/h during the same period. Winds will gradually ease through Sunday over all affected regions.


While the winds will pick up significantly through the evening and into the morning hours, North coast residents can at least be thankful that things won't be as wet here as they will be for those towards the south.

Up to 70 mm of rain is forecast for the southern areas through the afternoon and overnight period.

The North coast forecast calls for periods of rain and up to  55 mm by Sunday afternoon.

Transportation plans for this Thanksgiving weekend could also face challenges, the strong winds and heavy rain towards the south has BC Ferries issuing a service advisory that service on the Northern Adventure route from Port Hardy to Prince Rupert is at the moment considered weather dependent.

You can access further updates on the Ferry schedule for both the Port Hardy run and the sailings to Haida Gwaii from the BC ferry website.

And any road condition concerns can be explored on the Drive BC website, which has frequent updates on the provinces highways.

Update: BC Ferries issued the following advisory at 5:45 this afternoon. Please be advised that due to ongoing adverse weather conditions in the North Coast area, the Northern Adventure 6:00pm sailing this evening from Port Hardy will be delayed. The vessel is currently holding in dock in Port Hardy.