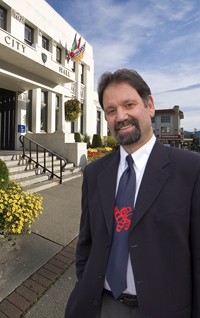 Mayor Jack Mussallem made his first public comments regarding the weekend windstorm as he appeared on CBC's Daybreak North program on Tuesday morning.

The Mayor spoke with the CBC’s Robert Doane providing his review of the weekend's storm related events, including confirmation that the repairs to the city's natural gas link to Terrace had been taken care of and that the schedule for re-lighting residential pilot lights will continue through the day.

Interestingly enough the Mayor advised that at the time of the line break PNG had left a small amount of gas in the lines in order for residents to have hot water and for use in cooking. An advisory that perhaps would have been better made public at the time of the situation.

The Mayor also told the CBC of his tour of the city on Sunday morning where he surveyed the damage, which in some areas was quite extensive. And relayed how he observed city crews which had been busy around town taking care of many of the issues that came in the wake of the storm.

Looking beyond the weekend's windstorm, Mayor Mussallem told the CBC that the city will review how it reacted in the aftermath of the storm as well as make contact with other agencies regarding information on services to the city. And that might be a timely bit of review, more than a few Rupertites expressed their frustration at the lack of information provided to city residents in the hours after the winds had moved further east.

The Mayors' comments may eventually be available for review on the CBC Daybreak website, the evolution of that site over the last year finds that updates are less frequent and Rupert news tends to make less and less of an impression on the news cycle.

Should Mr. Mussallem's interview be added to the archive you will be able to find it here.
Posted by . at 7:33 am